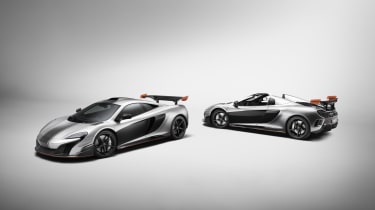 One wealthy individual has approached McLaren and asked the Woking-based carmaker’s MSO (McLaren Special Operations) department to build them not one, but two bespoke cars: one a coupe and one a folding metal hardtop spyder.

The resulting cars have been dubbed MSO R Coupe and the MSO R Spyder. They feature McLaren’s 3.8-litre twin-turbocharged V8 petrol engine, which has been tuned to produce 679bhp. That’s more power than any other McLaren save the near-million-pound (and sold out) P1 hypercar. The extra bhp comes as a result of polishing the engines’ cylinder heads and exhaust ports, and fitting both cars with airflow-optimised exhausts. 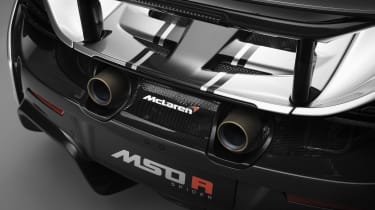 McLaren hasn’t explicitly said which model the MSO Rs are based on, though both are assumed to share their mechanical carbon backbone with the now-defunct McLaren 675LT.

We say ‘based’, but with extreme rear wings, pronounced front splitters and the Coupe’s roof-mounted air ram, McLaren considers the MSO R models to have enough individual features to mark them out as distinct models in their own rights.

Both cars are finished in Liquid Silver paint, with the Coupe getting a satin finish and the Spyder a gloss one. The five-spoke alloy wheels are similarly designed, with respectively matching satin and gloss finishes. 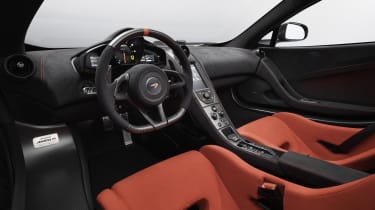 Other personalisation touches include Delta Red pinstripes, an MSO-branded key and a “dedication” plaque marking the two cars out a unique pair.

The interiors of the Coupe and Spyder are also matched, with red Alcantara suede-fabric upholstery, black stitching and MSO R logos on the headrests. A gloss-black finish has be given top the switches and a satin-black one to the air vents.

The owner of the pair of MSO Rs has opted to remain anonymous.