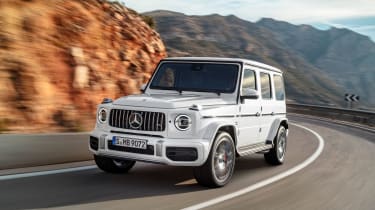 Following the full reveal of the new and improved G-Class earlier this year, Mercedes has released official pricing info for the hotly anticipated range-topping AMG G63 version. The performance-orientated model will start at £143,305, with a limited-run Edition 1 version costing £164,495.

Powered by a 577bhp 4.0-litre V8 petrol engine, the G63 gets its own specially tuned nine-speed automatic gearbox, adjustable suspension and all-conquering four-wheel-drive system (with three differential locks as in other G-Class models). The four-wheel drive puts more power to the rear wheels for a sporty feel, while the AMG-specific gearbox has selectable modes that further enhance performance.

Performance is not to be sniffed at – 0-62mph takes just 4.5 seconds and top speed is 137mph as standard, or 149mph if the ‘AMG Driver’s package’ is selected. Mercedes has also improved the efficiency of the most powerful G-Class by including cylinder deactivation technology – this means the engine can partially shut down in certain situations to save fuel. 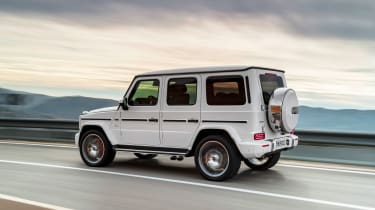 Don’t think that this large, high-performance SUV is particularly environmentally friendly, though. Official fuel economy is 13.2 l/100km, which converts to just over 21mpg; CO2 emissions are high at 299g/km.

The G63 is set apart from other models in the range by a number of styling tweaks inside and out. There’s a new radiator grille and bumper at the front, along with large air vents, while the rear bumper gets unique trim too. In true AMG G-Class tradition, flared wheel arches contain impressive 22-inch wheels, while running boards come as standard. A trademark side-exit exhaust also features.

Inside, the G63 adds some sporty touches to the new model’s already impressive redesigned interior, most obvious of which is a new flat-bottomed leather AMG steering wheel, complete with metal gearshift paddles.

Exact specifications and prices for the UK have not been confirmed, but it’s expected that customer deliveries will start in the summer.

Carbuyer understands two versions of the new G-Class will be available – the Mercedes-AMG G63 from launch, followed by the G350d soon afterwards, powered by Mercedes’ latest 3.0-litre diesel engine. Prices for the G350d are expected to start just under £100,000 – about on par with the outgoing model.

Mercedes has also launched a G500 model, powered by a 416bhp 4.0-litre petrol V8, but Carbuyer understands this will not be offered for sale in the UK.

All models will be available with Mercedes’ DYNAMIC SELECT system, whereby up to five driving mores can be selected to tailor the car’s engine, gearbox, suspension and steering to the driver’s needs. Comfort, Sport, Eco and configurable Individual modes feature, along with optional G-Mode, which optimises the G-Class for off-road use. This mode automatically engages if the driver activates any of the G-Class’ differential locks, too.

It's possible that hybrid G-Class models could arrive further down the line, but a fully electric version is very unlikely.

The new G-Class retains much of of the outgoing model’s iconic boxy styling, albeit with a wider platform that improves on-road stability and interior space – two of the old car’s major downfalls. The new car is 53mm longer and 121mm wider than before. Front and rear legroom, shoulder room and elbow room have all been improved.

Mercedes showed off the new model’s much-updated interior ahead of its scheduled unveiling at the Detroit Motor Show, but more details have been released. Here, a comprehensive modernisation has taken place, with next-generation Mercedes touches throughout – dual 12.3-inch infotainment screens with three selectable display styles, a 590-watt 16-speaker Burmester stereo circular metal air vents and touch-sensitive steering wheel controls all feature, along with swathes of high-end trim and luxurious leather. 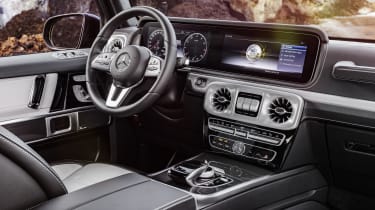 Clever design touches include dash-top speakers that mirror the car’s trademark bonnet-mounted indicators and the iconic passenger grab-handle in its rightful place.

Mercedes has made sure not to mess too much with its winning recipe – since the G-Wagen was first introduced, it has morphed from a utilitarian military vehicle into something of a fashionable (and wildly successful) alternative to more modern luxury SUVs.

Designers have aimed to retain characterful traits such as the car’s vault-like doors, flat glass and commanding driving position, while also adding practicality – leg, shoulder and elbow room are improved, interior storage is better and there are 60:40 split-folding rear seats to improve boot space.

Luxury is still the name of the game, though; full specifications are yet to be announced, but a 590-watt 16-speaker Burmester stereo system and heated, cooled and massaging front seats with air bolster side supports will be offered on the options list.