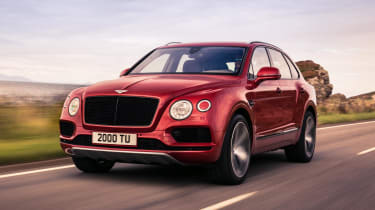 Bentley has revealed its new V8 Bentayga, which joins the existing V8 diesel and W12 petrol-powered models in the range. The new car, which is billed as being the sportiest Bentayga, is available to order now; prices start at £136,200.

The Bentayga is powered by a 4.0-litre, twin-turbocharged V8 petrol engine that produces 542bhp. Despite the car’s considerable size and weight, the result is a 0-60mph time of just 4.4 seconds and a top speed of 180mph.

Bentley claims (relatively) good economy of 24.8mpg, with CO2 emissions of 260g/km. The Bentayga V8 boasts a big fuel tank, too – a range of 464 miles is claimed. A start-stop system helps the large SUV achieve these figures, as does a cylinder deactivation system, which switches four of the V8’s cylinders off in certain conditions.

The petrol V8 model heralds the introduction of carbon-ceramic brakes for the first time on a Bentayga; Bentley claims that these are the most powerful ever fitted to one of its cars, and that the brake discs at the front are the largest ever fitted to a production car at 440mm (17 inches). 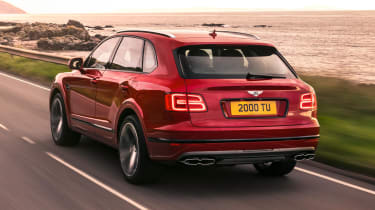 The Bentayga V8’s sporty nature is underlined by the inclusion of Bentley Dynamic Ride, a system that minimises body roll in corners, along with advanced stability and traction controls systems. If specified with Bentley’s All-Terrain Specification option, the Bentayga V8 offers a total of eight driving modes that set the car up for a number of on- and off-road driving conditions. The car’s suspension can also be set at different heights to suit the driver’s needs.

The usual array of active safety and driver assistance systems are standard or offered as options, including adaptive cruise control, traffic sign recognition, park assist and even a night vision system. The car gets an eight-inch infotainment system that features a 60GB hard drive, while rear-seat passengers can make use of the new Bentley Entertainment Tablet if specified, which is a 10.2-inch Android tablet with 4G, WiFi and Bluetooth connectivity.

Bentley has given the Bentayga V8 unique styling touches to help set it apart from other models. All-new 22-inch wheels are fitted, as is a black and chrome grille at the front and quad exhaust pipes at the rear.

A Bentley isn’t complete without a deeply luxurious interior and the Bentayga V8 is no exception. The same four, five or seven-seat layout as other models can be specified, along with a near-endless combination of trim materials and high-quality leathers. The V8 model gets unique options though, including high-gloss carbon fibre trim, wood-and-hide steering wheel and a new leather colour – a red named ‘Cricket Ball’. 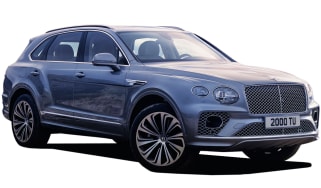