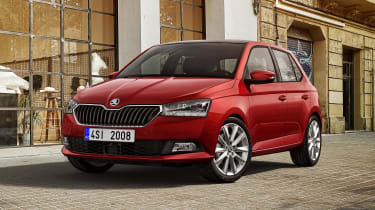 Skoda has taken the wraps off its facelifted Fabia supermini ahead of its full launch at this year’s Geneva Motor Show in March. The new car is due to go on sale in the UK in the second half of 2018.

Changes to the car’s exterior are minimal, with the introduction of LED head and tail-lights, lightly restyled front and rear bumpers and some new wheel designs, including an 18-inch option for the first time. The car will be offered in hatchback and estate bodystyles as before.

Inside, there's a redesigned instrument cluster, new trim for the dashboard and a selection of two-tone finishes for the seats. The infotainment system has had an upgrade, too: the standard 'Swing' system has a 6.5-inch screen and offers a full range of mobile online services through Skoda Connect. A step up to the ‘Amundsen’ system brings Skoda’s online traffic information service, while Apple CarPlay and Android Auto also feature as part of Skoda’s ‘SmartLink+’ technology. 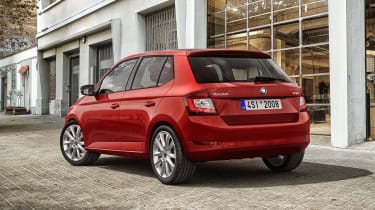 The new Fabia will be available with a choice four petrol engines, all of which are 1.0-litre, three-cylinder units. There are two 'MPI' engines, with 59 or 74bhp, or more modern turbocharged 'TSI' engines, with 94 and 109bhp respectively. All come with a manual gearbox, although the most powerful TSI will be offered with a seven-speed DSG automatic as an option. There will be no diesel option.

Safety has been given an overhaul, too: the revised Fabia will offer blind-spot monitoring, rear cross-traffic alert and auto-dipping headlights either as standard or as options, depending on trim level.

Skoda boasts the new Fabia is 'full of thoughtful design touches'. There’s an ice-scraper with a built-in tyre tread depth gauge stored under the fuel filler cap, while USB ports can be specified for rear passengers and there’s an LED flashlight in the boot.

UK prices for the new Fabia haven't been released yet, but we’d expect the new car to be priced in line with the outgoing model, starting at around £10,500.