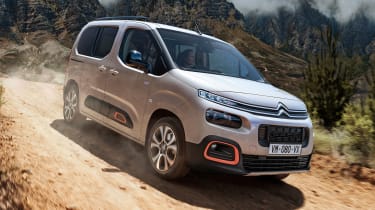 Citroen has taken the wraps off the latest incarnation of its Berlingo MPV, a van-derived family car made with practicality firmly in mind. It's set to make its physical debut at the Geneva Motor Show in March, ahead of a likely on-sale date later this year.

Now in its third generation, the Citroen Berlingo effectively started the trend for small van-based MPVs in the late nineties; the latest model takes a familiar recipe and tweaks it to suit modern tastes, as well as to fit into Citroen’s boldly styled range.

The new Berlingo gets all-new exterior styling that incorporates a number of signature Citroen styling cues: high-set, thin headlights, ‘Airbump’ plastic cladding with colourful highlights and a pseudo-SUV stance to match that of the C4 Cactus and C3 Aircross models. The new Berlingo will be offered in two sizes – M and XL. The latter is 35cm longer than the standard car; both will be available with a choice of five or seven seats.

A range of bold colour combinations will be available (eight body colours and two contrasting trim colours), with similarly stylish interior colour options – 'Standard', 'Metropolitan Grey' and 'Wild Green' interior 'ambiences' have been announced by Citroen. The interior itself has been improved with a range of useful cubbies – Citroen says there are no fewer than 28, with a total storage volume of up to 186 litres. 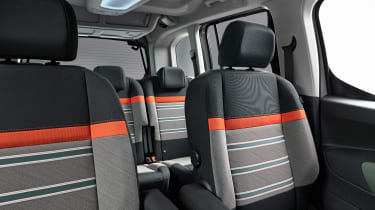 Five-seater models have three individual rear seats, each of which can be folded or removed completely, while the front passenger seat also boasts a folding mechanism. Citroen claims a completely flat load bay 2.7 metres long in the standard car, or 3.05 metres in the extended-wheelbase XL version. As with previous Berlingo models, the new car features sliding rear doors for improved access.

A full range of driver assistance and safety features also feature, including (but not limited to) adaptive cruise control, trailer stability control and a head-up display. Connectivity is improved, too, with technology including an eight-inch infotainment screen with sat nav and wireless charging for smartphones.

Exact details of engines have yet to be announced, but Citroen states a broad range will be available, including the familiar BlueHDi 1.5-litre diesel and PureTech 1.2-litre petrol. An eight-speed automatic gearbox will also available for the first time.