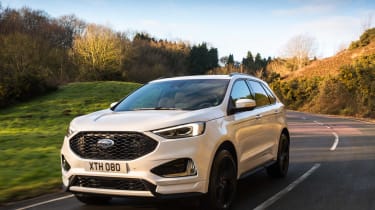 Ford has revealed its new Edge SUV – a facelifted version of the outgoing model with fresh styling, new engines and updated infotainment and safety equipment. The new SUV is set to arrive later this year, although an exact UK on-sale date hasn't been announced.

All versions get a bigger front grille, a redesigned bonnet, fresh front and rear styling treatments, plus standard LED head and tail-lights. The refreshed Edge will be offered in Trend, Titanium and top-spec Vignale trims, along with a new ST-Line specification – a sportier choice that adds unique styling details like 20 or 21-inch wheels, dual-exit exhausts and a sharp bodykit to the mix, plus sports suspension and variable-rate steering. 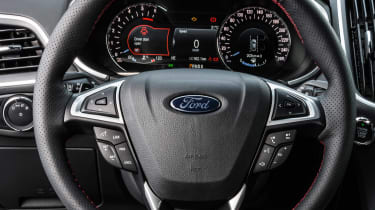 The Edge gets an updated interior with uprated materials throughout, a redesigned centre console, a new rotary dial for automatic models. Ford’s latest SYNC 3 infotainment system also features with full smartphone connectivity and an eight-inch screen, while customisable digital dials sit behind the steering wheel, allowing the driver to choose the layout of the speedometer, rev counter and other information.

Active safety systems feature heavily on the Edge, including post-collision braking, evasive steering assistance and adaptive cruise control with stop-and-go and lane-centring assistance. The Edge’s other systems include (but are not limited to) adaptive headlights, blind-spot monitoring and traffic-sign recognition.