Just 15 examples of unique hot hatchback to reach the UK 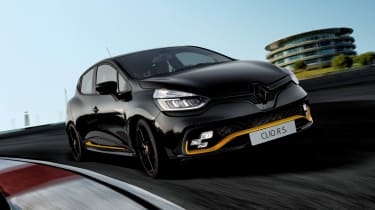 Renault has announced that its limited-edition Clio R.S.18 is on sale now, limited to just 15 right-hand-drive examples for the UK. The car, which is inspired by Renault’s Formula One racer, is priced at £24,295. Orders open on 1 May and customer deliveries start in June.

Based on the Renault Clio R.S. 220 Trophy, the R.S.18 has the same 217bhp 1.6-litre petrol engine and six-speed dual-clutch gearbox combination. Accelerating from 0-62mph takes 6.6 seconds, top speed is 146mph and claimed average fuel economy is an impressive 47.9mpg, with CO2 emissions of 135g/km.

Changes that set the limited-edition car apart are largely cosmetic: outside, there’s a black and yellow colour scheme that echoes that of the F1 car, with sporty black trim parts including the Renault logo on the nose, while R.S.18 decals on the doors and roof add a racy edge. A standard sports exhaust made by specialist Akrapovic is also included, giving a throatier engine note and – Renault claims – improved response from the engine.

Inside, there’s a numbered kick-plate to push home the limited-edition feel, along with an Alcantara and leather steering wheel, carbon-fibre-effect trim on the air vents and Renault Sport carpets. 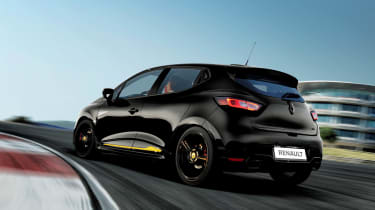 The R.S.18 gets the same drive mode selection system as the standard Clio R.S. 220 Trophy to help drivers set the car up to their needs; it includes a launch-control feature. Other performance-enhancing parts carried across include large brakes and ‘Hydraulic Compression Control’ – suspension damper technology similar to that found on rally cars.

Of the 20 ‘Renault Sport Specialist Dealers’ in the UK, 11 will have an example each of the car to sell, with one dealer (Renault Enfield) given two. The three remaining cars allocated to the UK will be available to order from anywhere in Renault’s UK dealer network.