The Peugeot Boxer van has been on sale for several years, but it’s still a competitive and popular choice 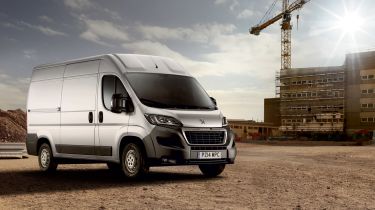 The Peugeot Boxer panel van hasn’t had a major facelift since 2014, but Peugeot’s biggest commercial model did adopt cleaner new engines in 2016. It has been around for some time, then, but the Boxer is still a decent contender among its rivals. It has a very competitive price, lots of space and decent specifications.

By downsizing the old 2.2-litre diesel engine to 2.0 litres, Peugeot made the Boxer compliant with the latest Euro 6 emissions regulations and power delivery and fuel-efficiency were both improved. The Boxer isn’t as good to drive as newer vans like the Ford Transit and VW Crafter, but for many operators that will be of little concern. Rivals include the Mercedes Sprinter, Vauxhall Movano and Renault Master, along with the Boxer’s sister vans the Citroen Relay and Fiat Ducato.

The Boxer looks attractive enough thanks to its large grille and stylish headlights, but it’s starting to show its age a little. There’s no shortage of configurations, though, with a choice of wheelbases and roof heights providing load volumes from eight to 17 cubic metres and a payload from 1,115 to 1,900kg, along with a crew cab to carry extra passengers. Its loading bay can easily accommodate a Euro pallet thanks to a generous 1,422mm between its wheelarches. A sliding side door 1,250mm wide can also allow a pallet to be loaded from the side, while a full-height steel bulkhead is fitted as standard to improve safety. The Boxer has also become a popular base vehicle for caravan and minibus conversions. 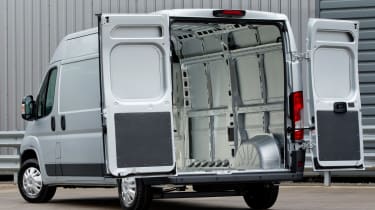 Fuel economy is a key reason the Boxer has proved so popular, and it doesn’t vary too much depending on the power output. In the short-wheelbase Boxer, both the 110 and 130bhp 2.0-litre diesels return 47.1mpg and emit 158g/km of CO2. The long-wheelbase version sees this drop to 44.1-47.1mpg depending on the engine, while 130bhp models can come with stop-start technology to save fuel and reduce CO2 emissions. Every Boxer is fitted with a six-speed manual gearbox – there’s no automatic – sending power to the front wheels.

The front seats are spacious and there’s lots of storage space, with two large gloveboxes, huge door bins and additional room under the seats and over the windscreen. A dual passenger seat is standard, too, unlike some vans that charge extra for a third front seat. Peugeot adds to the attractive kit count with standard Bluetooth and USB ports and heated door mirrors. Step up to the Professional trim and cruise control, air-conditioning and sat nav with a five-inch colour screen are added. 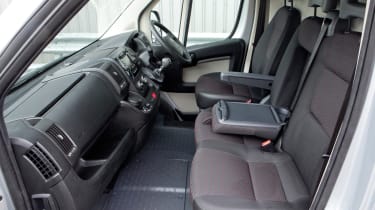 Reliability is another strong point, with no major faults reported despite the large number of Boxers that have no doubt amassed huge mileages. That’s a good sign, and in the facelifted Boxer some components were redesigned to further improve durability, including strengthening the body structure and loading door mechanisms.

The Peugeot Boxer is approaching retirement age, but still shows no sign of slowing down. It’s keenly priced, practical and well equipped. It might not be as good to drive as the latest models or as plush inside, but it comes in a wide range of sizes to suit varied operators. The 2.0-litre engine is still impressively economical, too.