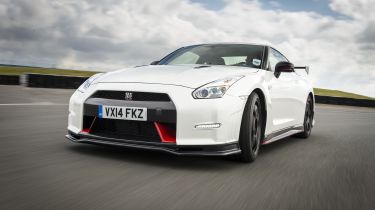 The Nissan GT-R NISMO is the most exotic version of the GT-R coupe, itself an extremely powerful, extraordinarily fast technological tour-de-force, launched more than a decade ago as a halo model for the Japanese brand. It was conceived as a long-awaited spiritual successor to Nissan’s historic sports coupe hero, the Skyline GT-R, which can trace its roots all the way back to the 1950s. When the new model finally appeared in the noughties, it was such an exotic and individual creation that Nissan decided to drop the Skyline connection and called it simply the Nissan GT-R.

The staggering nature of its performance, its manga-inspired styling and the legend of those giant-killing Skylines propelled the GT-R to the forefront of popular imagination for several years. Nowadays, the hysteria has died down a little, but constant updates to the GT-R have kept enthusiasts interested and it currently sells around 300 examples in the UK each year.The GT-R NISMO is based on an updated GT-R for sale at selected Nissan dealers since early 2017, and which introduced a raft of updates including new styling, greater performance and various other refinements. The ‘basic’ GT-R spec includes three trim levels called GT-R Pure, GT-R Recaro and GT-R Prestige, while a GT-R Track Edition engineered by NISMO – Nissan’s Japanese motorsports arm – is also available.

The full-on GT-R NISMO spec goes well beyond even the Track Edition upgrades, which helps account for its cost. The GT-R NISMO price tag of £150,000 makes it over 50% more expensive than the standard GT-R Prestige and as a result it appeals only to the most dedicated enthusiast.

Coming as it does from Nissan’s racing division, the GT-R NISMO's performance is even more spectacular than the standard car. The 3.8-litre twin-turbocharged V6 engine has been upgraded to a stonking 592bhp – around 30bhp more than any other model. Combined with a weight-loss programme that sees 30kg saved through the use of carbon-fibre panels in key areas, it’s enough to take the GT-R NISMO's 0-62mph time down to around 2.5 seconds, against the standard car’s 2.8 seconds.

The GT-R NISMO's acceleration is matched by a top speed of 196mph, but it’s the race-track-focused handling that really sets the NISMO apart from its less exotic siblings. The nose features aerodynamic tweaks that increase downforce to improve high-speed stability, while the body structure has been further strengthened – which NISMO says allowed it to refine the suspension further in pursuit of even more extreme cornering ability.

The result is a ride that’s even harsher on the road than the standard GT-R, but that won’t put off the handful of die-hard GT-R fanatics who'll be attracted to the NISMO for its performance, image and rarity.

As befits the range flagship, the NISMO gets some additional upgrades to its interior which help to set the model apart and justify its high price. However, this is limited to Alcantara leather covering on the dashboard, steering wheel and armrest, plus unique Recaro seats with red leather inserts, and the ambience is very-much more sports-focused than luxury.

For a die-hard few fanatics, owning a GT-R NISMO will be a dream come true. Anyone else will find it even more compromised than the regular versions, in particular when it comes to ride comfort, which in the NISMO is firm enough to seriously dilute enjoyment on the road.