New Audi Q7 due in September 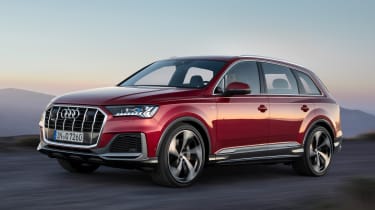 Audi has announced that a new Audi Q7 SUV is set to arrive later in 2019. The facelifted model will feature a set of mild-hybrid powertrains and tweaks designed to improve the way it drives. The new car will arrive in Audi dealerships in September this year and will start from £55,000.

Designers have taken the chance to update the seven-seater's grille, bumpers and side skirts, while also rejuvenating the rear with extra chrome trim and new exhaust finishers. As standard, the Q7 also sports a new two-tone paint scheme, with the lower bumpers, sills and wheelarches all finished in anthracite.

LED headlights are standard but you can still upgrade them to adaptive Matrix LEDs and Audi Laser Light for an additional cost. With an automatic high beam and compact laser modules, Audi claims the Laser Light option can help drivers see twice as far at night.

Every Q7 sold in the UK gets seven seats as standard, along with air suspension. Active roll stabilisation is a new option for 2019 - it uses a 48-volt electric motor to power active anti-roll bars that keep the car level in corners and improve comfort generally.

Three versions of Audi's 3.0-litre V6 mild-hybrid powertrain will be offered - two diesels and one petrol. Badged 45 TDI and 50 TDI, the diesels offer 228bhp and 282bhp respectively, getting the Q7 from 0-62mph in 7.1 and 6.3 seconds. The petrol 55 TFSI with 335bhp will see this acceleration time dip under six seconds.

All three models are fitted with an eight-speed automatic gearbox and Audi's quattro four-wheel drive system, which can send up to 60% of the engine's power to the axle with the most grip.

A range-topping Audi SQ7 version will join the range with a muscular 4.0-litre V8 diesel that offers 429bhp and 900Nm of torque. This performance version has a 0-62mph time of 4.8 seconds; if you'd rather save fuel, a 55 TFSI e plug-in hybrid model is expected to be announced nearer the new Q7’s launch.

Want to know more about the Audi Q7 and its rivals, the BMW X5 and Mercedes GLE? Read our full in-depth reviews.