New Renault Captur SUV is based on the same platform as the Renault Clio and Nissan Juke. 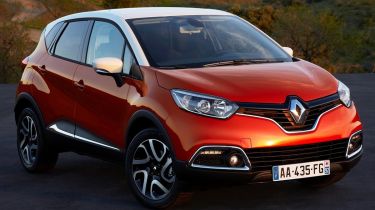 The first official pictures of the production model of the new Renault Captur SUV have been released.

Based on the same platform as the Renault Clio and Nissan Juke, the Captur is longer than the Clio but slightly shorter than the Juke.

Designed to feel like an MPV on the inside, the Captur will have lots of interior space, a high driving position and a large boot, and all models come with keyless entry, hill start assist and parking sensors as standard. The Renault R-Link infotainment system – with touchscreen tablet, six-speakers and Bluetooth connectivity – is available as an option.

The engine range will be the same as the Clio, most notably including a diesel engine that emits only 96g/km of CO2, which is far less than the cleanest Juke model. Renault’s small car product guru Benoit Bochard describes the Captur as a “compact, unaggressive crossover, which is particularly user-friendly”.

The Renault Captur goes on sale in the UK in June. Expect prices to start from around £13,000.