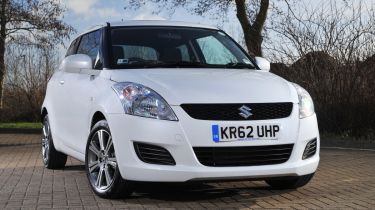 Suzuki has announced the launch of its Swift SZ-L special edition, which it debuted at the Autosport International Show, last month.

The Suzuki Swift SZ-L comes with a 1.2-litre 93bhp engine and is based on the current SZ3. But in an attempt to attract buyers, the manufacturer has thrown in plenty of additional kit to differentiate it from the standard car.

The special edition model comes with extra equipment designed to give the car a more sporty appearance, and includes a rear spoiler, unique 16-inch alloys and free metallic paint. Privacy glass, cruise control and red stitching on the steering wheel and gear surround are included, too.

Despite its dynamic appearance, the Swift SZ-L emits just 116g/km and will return 56.5mpg. The SZ-L should also appeal to younger drivers thanks to its helpfully low insurance group.

Suzuki is offering the Swift SZ-L as a part of its extended VAT-free promotion, running until 31 March. Prices start at £10,599 for the three-door model, rising to £11,016 for five-door cars.