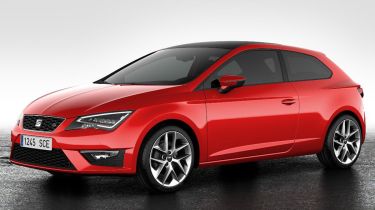 SEAT has revealed the first pictures of the new three-door version of the Leon, called the Leon SC. Instead of just removing the rear doors, SEAT has also shortened the amount of space between the front and rear wheels, which helps to make the three-door Leon look sportier.

That’ll slightly decrease the amount of kneeroom for rear passengers, but SEAT claims rear headroom and boot space are the same as in the five-door. That means there’s still 380 litres of luggage room.

Customers will be able to order the Leon SC shortly after it debuts at the Geneva Motor Show in early March. As with the five-door there will be a choice of S, SE and flagship FR specifications. SE cars get 16-inch alloys, cruise control and hill-hold control, while FRs get tinted windows, LED rear lights and parking sensors.

The SC’s engine line-up is borrowed from the five-door, too, kicking off with a 1.2-litre turbocharged petrol, producing 104bhp. The diesel line-up includes the efficient 1.6 TDI, which claims 74.3mpg fuel economy and 99g/km CO2 emissions, making it free from road tax.

When the Leon SC goes on sale, it’s expected to cost around £500 less than the five-door model, which starts from £15,670. To view the full SEAT range, see the CarBuyer SEAT reviews page.