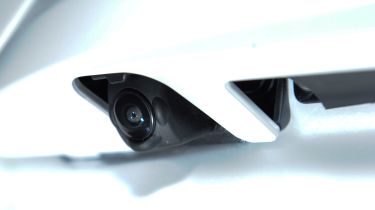 The 2013 Nissan Note is due to go on sale in the autumn, and is set to be the first car in its class to get the carmaker’s revolutionary Around View Monitor system.

Available as part of Nissan’s Safety Shield package, the technology assists the driver by displaying images from around the car on the interior infotainment screen. Populated via a series of cameras located on the rear, front grille and wing mirrors, the system gives a bird’s eye view of the car and is designed to help minimise the risk of accidents and make tight maneuvers easier.

Safety Shield also incorporates Nissan’s Blind Spot Warning system, Lane Departure Warning and Moving Object Detection. The collection of safety systems essentially gives the driver eyes in the back of their head – allowing them to see objects that would normally be obscured from view. It also alerts to potential dangers like pedestrians or hidden vehicles when reversing.

Nissan says that from talking to drivers they’ve learned that a key factor in making them feel safer when maneuvering is being able to see what’s happening around them. It developed the system with this in mind, enhancing drivers’ vision by allowing them to see more of their surroundings.

Prices are yet to be announced but expect a slight premium over the current Nissan Note, which starts at £11,650. The Safety Shield package is expected to cost extra, too, even on top-spec Note n-tec+ cars.