Due to go on sale later this year, BMW has finally released official pictures and details of its all-new 6 Series Coupé. 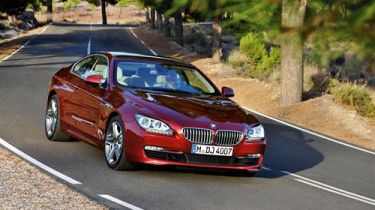 BMW has pulled the wraps from its all-new 6 Series Coupé. Due to go on sale in the UK towards the end of the summer, it will join the Convertible - which reaches showrooms in April 2011.

Offering two different engines, buyers can choose between the 640i, which is powered by a straight-six petrol developing 316bhp, or the more powerful 650i, which gets a 401bhp 4.4-litre V8.

Both models will have the top speed limited to 155mph and offer BMW’s quick shifting, impressive eight-speed automatic gearbox as standard.

The 640i also gets the very latest in BMW stop-start technology helping it to a seriously impressive and frugal 36.7mpg and 179g/km, while the 650i delivers 27.2mpg and 243g/km.

Equipment highlights include the most recent-generation of BMW’s head-up display, a rear-view camera and night vision.

On the road, the new 6-Series Coupe is 75mm longer than the previous version, meaning there is more cabin space than before.

BMW has also confirmed that the new 6 Series Coupé will be making its international debut at the Shanghai Auto Show in April. A new high performance M6 will follow in 2012.