Rugged new Forester SUV due to make its public debut at the Los Angeles Motor Show at the end of November. 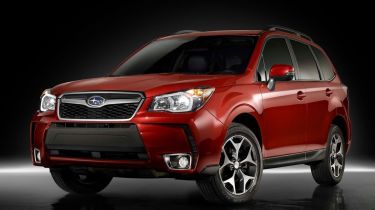 Subaru has revealed a new version of its rugged Forester SUV. Due to make its public debut at the Los Angeles Motor Show at the end of November, these images clearly show the styling changes, although no interior pictures have been released.

At the front, the old full-width grille has been replaced with a more squared-off version that has more angular headlights either side. It’s similar in look to Subaru’s other SUV, the XV. Underneath the grille there’s a sharper front bumper with new fog lights built in.

The Forester has grown in size, too. It now measures 35mm longer, 20mm wider and 15mm taller than the old car, while the wheelbase has been stretched by 25mm.

The car you see here is the US-spec Forester (the UK version is yet to be revealed) but the design is expected to be almost identical. What won’t be the same though are the engine choices.

US models will come with a 170bhp 2.5-litre four-cylinder boxer engine and a 250bhp 2.0-litre turbo, with a choice of a six-speed manual or CVT automatic gearbox. But when it reaches the UK, sometime next year, the Forester is expected to get the same 148bhp 2.0-litre petrol and 145bhp 2.0 diesel engines as the car it replaces. It's yet to be confirmed whether the high-performance 2.0-litre turbo version will make it to the UK either.