Volkswagen has released pictures and details of its all-new Beetle Cabriolet. 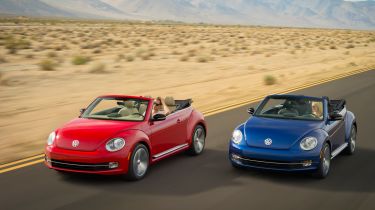 Official pictures have been released of the third-generation Volkswagen Beetle Cabriolet, ahead of its arrival in showrooms in spring.

The new Beetle Cabriolet gets the same bubble shape and bold, round headlights as the Beetle hatchback on which it is based. It has a lower roofline and a more upright windscreen, though, which echoes the design of the original 60s Beetle convertible.

Inside, the retro theme continues, with a large, round instrument cluster and infotainment system.

The soft-top roof folds flat in 10 seconds and can be operated at low speeds. There should be plenty of room for four adults, too, while the rear seats will fold flat for maximum practicality.

The Beetle Cabriolet will be available with a choice of seven engines from launch, including an entry-level 1.2-litre TSI and a range-topping 197bhp 2.0-litre TSI petrol. The range will also include a set of economical 1.6-litre and 2.0-litre TDI diesel units.

For more on the Volkswagen Beetle, see our CarBuyer Beetle review.