542bhp Panamera Turbo S is Porsche's most powerful saloon ever. 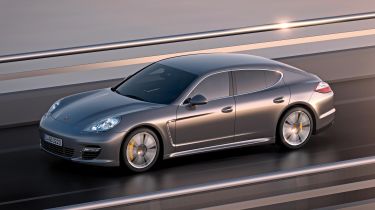 Porsche has released details of a new Turbo S variant of its Panamera saloon.

Based on the Panamera Turbo, the most significant change for the new model is a power increase from 493bhp to 542bhp, while torque is up from 700Nm to a maximum 800Nm, with Sport and Sport Plus modes activated.

Despite this, fuel economy is unchanged over the standard Turbo model, and the Turbo S is capable of an average of 24.6mpg.

The Turbo S comes equipped with Porsche Dynamic Chassis Control (PDCC), which allows the driver to adjust the firmness of the suspension.

Two-tone leather upholstery is fitted as standard to the interior, and 20-inch Turbo II alloy wheels feature on the outside.

The Panamera Turbo S will be available from June, costing from £122,623.