The Renault Fluence Z.E. is set to be the UK's cheapest, fully electric, full-size car when it goes on sale in 2012. 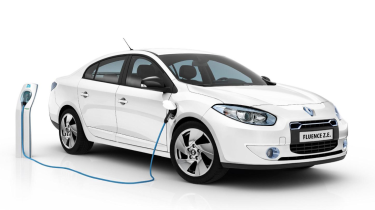 In 'Prime Time' five-seat, four-door saloon guise, the Fluence comes as standard with 16-inch alloys, automatic lights and wipers, climate control, cruise control, an economy meter and a TomTom sat-nav device. Renault are keen to stress that the Fluence has been priced to be competitive with comparably-sized and equipped diesel cars in an attempt to attract more buyers to their zero tail-pipe emission vehicles.

The Fluence will arrive on UK shores in 2012, followed by three other fully electric models. Renault have also announced a battery lease scheme whereby owners pay a monthly fee to cover all battery and technology maintenance. Contracts will be priced from £75.

For more information on Renault's range of electric vehicles inculding the Twizy and Zoe models visit www.renault-ze.com ,where you can also make a reservation.