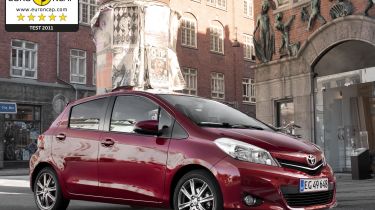 The Yaris also gained a five-star rating for the more stringent test that will be introduced in 2012, achieving an adult occupant rating of 89%, with 81% for children. In pedestrian tests the Yaris scored 60%.

The Yaris is equipped with a seven airbags as standard, including a driver's knee airbag that provided good protection of the knee and femur during frontal impacts. Watch the Toyota crash test video here.