Unveiled at the 2011 Geneva Motor Show, the Toyota Yaris has received hybrid power in the form of a downsized version of the Prius' Hybrid Synergy Drive system.

Based on the recently revised Yaris which will be available to buy in the UK with petrol or diesel power from September, the hybrid will go on sale approximately six months later and is part of the brand's plan to build a petrol-electric example of each of its models by the early 2020s.

Positioned at the top of the range the Yaris Hybrid will receive climate control, sat-nav and leather trim as standard and will be built along side the rest of the range in France. Toyota have also introduced a flat underfloor, specially profiled 18-inch alloy wheels and aerodynamic bumpers to help the petrol-electric version slip through the air with less drag, targeting 90mpg and sub 80g/km CO2 capability.

Although prices have yet to be released the Yaris Hybrid is expected go head-to-head with Honda’s comparably specced but less economical Jazz hybrid. 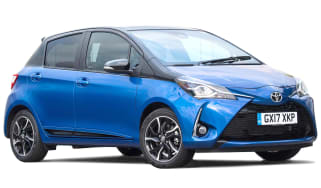