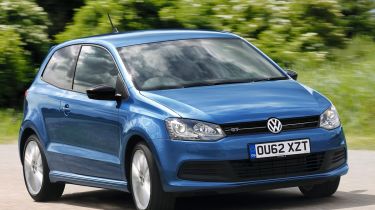 Prices for the Volkswagen Polo BlueGT have been confirmed. The BlueGT starts from £17,400 for the three-door model and £18,020 for the five-door. The car is available to order now, with first deliveries in December.

The Polo BlueGT features VW’s new 1.4-litre TSI petrol engine, which the company claims offers the performance of a petrol engine with the economy of a diesel.

Performance is good. The Polo goes from 0-62mph in 7.9 seconds and on to a top speed of 130mph. However, whether you opt for a three-door or five-door bodystyle, or six-speed manual or seven-speed DSG auto gearbox, all models still return a claimed average of 61.4mpg and emit 107g/km of CO2.

The Polo BlueGT’s economy is down to the new engine’s cylinder deactivation technology, which switches off two of the engine’s four cylinders when accelerating lightly.

The remaining cylinders reactivate “imperceptibly” when the driver requires more power from the engine. A display in the instrument binnacle lets the driver know when cylinders are deactivated.

All Polo BlueGT models get 17-inch alloys, the same rear spoiler and front bumper as the Polo GTI and the side sills and front windscreen rain channels from the Polo Bluemotion.