Despite being such a big car, the Peugeot 5008 is very good to drive

MPVs aren’t generally known for their driving dynamics, as they’re usually more about practicality than sporty performance, but the 5008 is genuinely good to drive. The steering is really precise for a people carrier and it feels very stable in corners, too. Some models come with Dynamic Roll Control – an electronic stability device that further reduces body roll in corners. The Ford S-MAX trumps the 5008 for overall driving experience, but the Peugeot will still be more than responsive enough for most people. 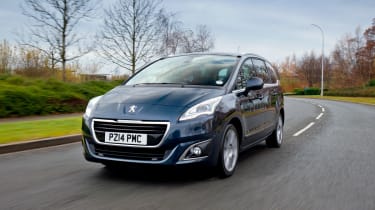 The one petrol engine, a 1.2-litre PureTech 130, sits in the middle of the range for performance. Reaching 62mph from a standstill in 10.9 seconds and produces an impressive amount of power for such a small engine and can carry a decent load without feeling too underpowered. The diesels are better in terms of pulling power, though.

Overall, the diesel engine is better suited to the practical job of ferrying your family and kit around, because of its extra pulling power. It's both pretty smooth, too.

The 120bhp 1.6-litre BlueHDi will more than likely do everything most buyers need, thanks to its balance of good fuel economy and reasonable performance. It’s the slowest engine available in the 5008, with 0-62mph taking 11.2 seconds with the six-speed manual gearbox or 12.8 seconds with a six-speed automatic, but fast acceleration will most likely be near the bottom of buyers’ needs for this class of car.