"With its no-nonsense design and capable chassis, the Panda is a value for money and spacious small car." 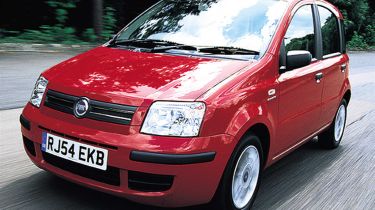 ‘Cheap and cheerful’ is often a slur on a new car, but here it’s a positive. The Panda’s boxy shape means interior headroom is plentiful, so it feels bigger than it looks. The boot isn’t huge, and there isn’t acres of rear legroom, but for families with two small children, it’s big enough. The cheapest 1.1-litre Active version is very basic, so most buyers will be better served in air-conditioned Dynamic versions with the pleasingly quiet 65.7mpg 1.3 MultiJet diesel engine.

The smallest 1.1-litre petrol engine returns 56.5mpg, but the bigger 1.2-litre with slightly more performance offers the same economy. The 1.3 MultiJet diesel beats them both - although all three engines are in the £30 per year Road Tax band. 4x4 models aren’t as economical, but ultimately the Panda is one of the cheapest cars to run in any class.

The Panda feels light and easy to use

The high driving position means visibility is great, while firm suspension means it doesn’t suffer from body roll in corners. The Panda also smooths over bad road surfaces and raised road markings generally well, although it feels a little on the firm side and can thump into bigger potholes. The gearlever is located high on the dash, so it’s close to the driver and is within easy reach. The Panda’s overall feel is one of lightness and ease of use - the simple dashboard is easy to read and the controls are easy to use.

Motorway crosswinds can shake it around a little

The seats are comfortable, the steering and pedals are light, while the driving position is comfortable. Four adult occupants might find legroom is tight, but the tall roof means generous headroom. The suspension provides a smooth ride too. However, the Panda's rather upright shape means motorway crosswinds can shake it around a little, and wind noise filters into the cabin. The rugged 4x4 version might be excellent as a mini off-roader, but it’s slow and the four-wheel-drive transmission makes a lot of noise.

Active versions don’t get a split-folding rear bench seat, but all other models do. The 50:50 split means three can still sit in the car when a bulkier item in the boot has to encroach into the cabin. That could be a fairly frequent occurrence too, as the 206-litre boot doesn’t have a great deal of front-to-back depth and isn’t as big as the boots found in other superminis. The Ford Ka has a 224-litre boot, for example.

Reliability could be better

The Fiat Panda has been in production since 2004, and has had many of its electrical niggles ironed out - although it’s not got an impeccable reliability record. The latest of a few recalls involved 26,000 cars for a faulty anti-lock brake unit. Safety is only average, too, with entry level cars awarded a three-star Euro NCAP rating; and only more expensive models get side airbags and electronic stability control. All cars have anti-lock brakes, though.

Is the Panda value for money? Absolutely - unless, that is, you opt for a 4x4 version. The Panda Cross 4x4 is good off road, but in the context of the much cheaper non-4x4 versions, it seems an extravagance. Conversely, the Active is priced well but, as mentioned, is very basic. Choose a Dynamic version with the 1.2-litre petrol or 1.3-litre diesel engine, and you’ll be getting great value.