"The Peugeot 2008 Active adds a lot of equipment, but the 2008 Allure remains our pick of the range." 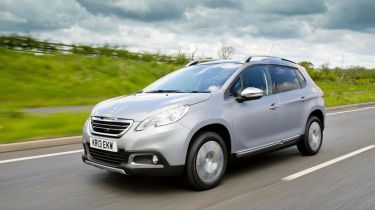 The Peugeot 2008 Active is a crossover SUV with a little more equipment than the entry-level Access model. It’s not a great deal more expensive than the Access, but the extras it comes with make the 2008 far easier to live with on a day-to-day basis.

While the basic 2008 looks a little plain on the outside, the alloy wheels and front fog lights that come with the Active go some way to making the 2008 more attractive.

Inside, it’s a similar story: Bluetooth connectivity, together with USB input for your smartphone or music player mean the 2008 Active has enough technological features for the majority of customers, while a colour touchscreen display lifts the interior further.

Moving up to Active trim also means you get a wider choice of engines: the Active is available with the same 81bhp 1.2-litre petrol or 74bhp 1.6-litre diesel engines as the 2008 Access, but in Active trim you can also specify the more powerful 99bhp diesel engine and stop-start technology becomes an option for the petrol engine.

The Peugeot 2008 shares its economical engines with the Peugeot 208 and 308 hatchbacks, while the 1.6-litre BlueHDi with stop-start technology returns 78.5mpg, making it more efficient than a comparable Nissan Juke.While the 2008 is by no means a big car, its well designed interior means passenger space is generous, while the boot is also a good size.It's also a comfortable car over long distances thanks to its soft suspension, which makes even potholed roads seem smooth.

A Peugeot 2008 fitted with a petrol engine is a slow car. While the 1.2-litre petrol engine manages an impressive 64.2mpg, this is offset by a 0-62mph time of 15.3 seconds, which makes keeping pace with traffic at speed tiring.The driving experience is also not particularly involving. While it's comfortable over bumps and a relaxed cruiser, the steering doesn't inspire a great deal of confidence: it's twitchy at motorway speeds and cornering produces a fair amount of body lean.Peugeot's decision not to fit an alarm as standard is puzzling, and we recommend this as an extra to specify when ordering a 2008.

The 99bhp 1.6-litre BlueHDi diesel engine is the best option for the Peugeot 2008. It doesn't need to be worked hard and its 78.5mpg fuel economy is impressive. It's also road-tax-exempt, thanks to low CO2 emissions.