The Peugeot 207 Sportium is mildly more sporty-looking but no faster than the 207 Active. But you do get quite a lot more equipment for around £350 extra. 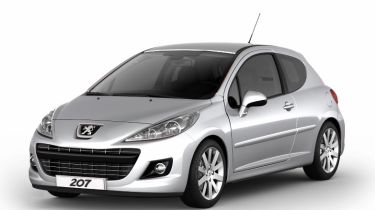 Sportium is a mildly sportier limited edition version of the 207 which offers significantly more equipment than the Active model it is based upon for a modest price increase. There are no body revisions and the standard colour is white, although you can pay a little extra for one of four alternatives. The Sportium has alloy wheels (14 or 16 inches, depending on engine), dark-tinted rear windows, sports seats and a multimedia system featuring sat-nav and Bluetooth. Five-door versions also get four electric windows instead of two. The suspension set-up is the same as Active, and the engine range is made up of four of the five available with Active trim. There’s a 75bhp 1.4-litre petrol, the 95bhp turbo 1.4 petrol co-developed with BMW and 1.4 and 1.6-litre diesels producing 70bhp and 92bhp respectively. The 207 is offered with three or five doors.

The 207 is one of the best-looking small cars, despite its age, and it’s even sharper with the darkened glass and alloy wheels that are part of the Sportium package. It’s not quite as engaging as a Ford Fiesta to drive, but it’s light and nimble, complemented by the torquey turbocharged petrol engine and the two diesels. Most versions also ride well: the exception is the 1.6 diesel with 16-inch wheels, which is uncomfortable on bumpy roads. The cabin is smart and the sports seats are stylish and supportive. Sportium represents very good value, too, with a Clarion multimedia stereo and electric rear windows included.

Limited edition models like this are attractive because they frequently provide a lot more standard equipment for only a small price increase. But they don’t always hold value as well as other versions, because the used-car trade has difficulty knowing how to price them. Peugeot 207 secondhand values aren’t the best in the supermini class to begin with. Rear-seat legroom is relatively poor, as in all 207s, and reliability isn’t the best in class. Just because the Sportium is a limited edition, that doesn’t mean you shouldn’t haggle for a decent discount to help offset its relatively high price.

As with the Active model, we’d stick with the turbocharged 1.4-litre petrol engine unless you do a high enough mileage to make one of the diesels pay for itself.