Toyota has had its fair share of recalls over the past few years, but the company’s swift action to correct potential problems means owner confidence remains strong. While the Yaris could only finish 59th out of 100 models in our 2019 Driver Power customer satisfaction survey, it put up a strong showing in key areas such as reliability and running costs.

The Toyota Yaris finished in 59th place in our latest Driver Power satisfaction survey, with just 10.5% of respondents saying their car developed one or more fault in the first year of ownership. As a brand Toyota ranked 10th out of 30 manufacturers.

For a manufacturer known for its reliability, an average result will be disappointing, and the Yaris also came in for criticism for its lacklustre ride and handling along with mediocre interior comfort. 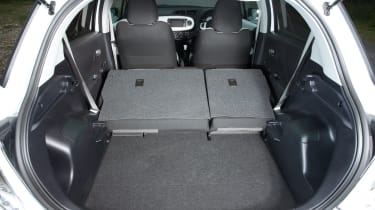 The Toyota Yaris was awarded the maximum five stars when it was evaluated by Euro NCAP. Although this rating was awarded back in 2011, it still received five stars when retested in 2017, despite the far more rigorous nature of the updated test regime.

All Yaris models have seven airbags, electronic stability control and a seatbelt reminder buzzer for the front and back of the car. A more unusual addition is the Toyota’s Emergency Brake Signal system. In the event of an emergency stop – on a busy motorway, say – it activates the car’s hazard lights along with the brake lights to warn following vehicles.

The update to the Yaris in the first half of 2017 means all models now get Toyota Safety Sense as standard, which adds autonomous emergency braking, lane-departure warning and auto-dipping headlights.