As an ownership proposition, the Rapid Spaceback has all the signs of being a painless car to own long-term. Skoda has long been well thought of by motorists and its cars are well equipped with all the safety equipment you could hope to need.

In recent years, our annual Driver Power survey has indicated Skoda drivers to be a very satisfied bunch, voting the brand into second place (out of 27) in 2017 – a very strong result indeed and only beaten by Lexus. Unfortunately, the Rapid doesn't appear individually in our results table – too few owners participated in the survey for it to be accurately scored. However, Skoda owners as a whole seem impressed with the low running costs of their cars, while only 9.8% of owners reported suffering any faults in the first year of ownership. 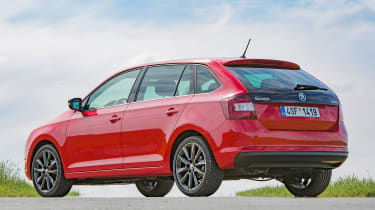 The Skoda Rapid was awarded a five-star safety rating by Euro NCAP in 2012, the highest award given. This was helped in part by the long list of safety equipment every Rapid is fitted with, including airbags for the driver and front-seat passenger, as well as head and side airbags and ISOFIX anchor points for child seats.

Electronic stability control is also standard, as are anti-lock brakes with multi-collision braking – where the brakes apply after an impact to reduce the chance of further collisions. Autonomous emergency braking (which Skoda calls city emergency braking) is available as an option on SE Tech and SE Sport models, but it’s a shame this isn’t fitted as standard.