Reporting a car fault to a workshop 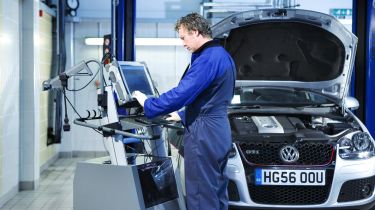 Whether a car is nearly new or a little bit older, nobody wants to find a fault with their vehicle. Whatever form it takes, you'll want it remedied as quickly and efficiently as possible. For this to happen, it's important the technician working on your car understands exactly what fault you've experienced.

While some car faults, such as a warning light on the dashboard, are clear for anybody to see as soon as the ignition is switched on, others can need a little more explaining. Read on for advice on the best way to explain any fault your car is suffering from, ranging from electronic issues to that annoying rattle that's been driving you to distraction.

Before we go on, it's well worth considering that the most effective way to ensure a technician understands the fault you wish to report, is to show it to him or her as it happens.

If you categorically know the symptoms will arise every time you drive the car, it's worth mentioning when you book your car in that you can demonstrate the fault to your technician or service advisor. Most service departments would rather allow a member of staff to leave the workshop to experience a fault first-hand than to resort to blind trial and error later in the day.

The most frustrating faults, though, are those that don't surface when a technician is on hand to witness the symptoms. In these cases, it's best to be able to describe exactly how the workshop might recreate the circumstances in which the issue usually arises.

These handy hints will provide guidance on giving a workshop technician the best chance of fixing your fault first time.

Some engine faults are indicated by observable symptoms, such as an excess of soot or smoke from the exhaust, or perhaps a tell-tale light on the dashboard. Both are easy enough to describe, and even the simplest summary should be sufficient for a technician to successfully investigate.

What aren't so easy, though, are those faults you feel while you're driving, rather than those you can see at a standstill. This makes it all the more important to be able to accurately describe exactly what's happening when something doesn't seem right.

There are a number of sensations an engine malfunction can present but the most common relate to how the engine is electronically controlled. A frequently encountered symptom is hesitance – when a car is reluctant to respond to your accelerator input or fails to pull as hard as you might expect it to when accelerating. When discussing hesitance, it's vital you make accurate notes as to exactly when symptoms occur. The more points you can make, the clearer a technician's impression of the fault may be.

Below are some of the many questions you can be expected to be asked by a well-trained technician or service advisor, and accurate answers may help to pinpoint the fault far more readily than simply handing over the key.

When? Does the issue occur soon after the engine is switched on or once it's reached normal operating temperature? Does it occur when pulling away or only once you've reached a certain speed? If you have a manual gearbox, does the fault appear in every gear? If you have an automatic gearbox, does the car refuse to change gear when the fault occurs? Does the engine refuse to rev beyond a certain number (as shown on the rev counter). Does the symptom arise more frequently at a certain fuel level? Has the car recently been driven through deep standing water?

How? Is the fault intermittent or does it happen every time? If hesitant, is the delay short, sharp and followed by a sudden jerk of acceleration, or does the car gradually 'wake up'? When symptoms arise, are they accompanied by any other sensation, such as vibration or noise? Have you noticed any difference in fuel consumption since the fault has been encountered? Have you noticed any unfamiliar smells from the car since symptoms first arose?

Who? Have other drivers of your car experienced this fault? Has any other garage investigated this fault previously? Has the car recently been serviced, repaired or modified?

While engine faults can – with perhaps a few pointers from the driver – usually be investigated and solved within a workshop environment, the same isn't always true with suspension, brake or steering issues. Although obvious signs of wear, tear or mechanical failure might be picked up in a visual inspection, if something doesn't feel right on the road, describing it can be a real indication of what’s wrong, and will potentially save hours of workshop inspection time and cost.

As above, here are some of the points you might wish to consider when referring a suspension, steering or brake fault to a workshop for investigation:

When? Does the fault occur at the very beginning of your journey and resolve itself, or does it appear during your journey? Is the issue constant, or does it come and go? Does the fault happen most often in wet or dry, cold or warm weather? Is the fault more apparent when driving at or slowing down from certain speeds? Is it apparent on all surfaces, or most notably on rough or potholed roads? Has the car recently passed through a road pothole or suffered a kerb impact?

How? Can the fault be felt, heard or both? Is the fault most strongly felt or heard from a certain place in the car? Is the sound more evident when a window is open? Is there vibration through the steering wheel or the seats, or both? Has this fault suddenly developed, or has it been steadily growing more noticeable?

The same Who? questions outlined above are equally applicable here.

Describing rattles and bumps and other occasional faults

These can be some of the most annoying faults to trace and resolve, and have a nasty habit of disappearing when you’re trying to show them to a mechanic. As such, a useful technique modern technology makes possible is to capture a video or audio recording of the fault as it happens, whether it's a sound that shouldn't be there, or misbehaviour of the dashboard electronics.

Such a recording can be safely captured with the help of a passenger using a smartphone. The capture of visual faults is self explanatory, but rattles and sounds can be a little trickier to record. Fortunately, many phones are capable of picking up suspect noises despite the usual background rumbles of everyday driving. It can still be of great help for you to announce the sound after you've heard it. Rattles from interior trim are likely to require the phone to be held closer to the location of the rattle, which might require the passenger sitting in the front or rear seat, depending on where the rattle is located. Remember, a rattle will be very hard to fix without having been located first.

If a recording of your car's fault can't be made, it's vital the investigating technician is given lots of detail about how and when the fault is experienced. Here are some pointers:

When? Is the fault more likely to occur in certain weather conditions? Is the fault exacerbated by bumps in the road? Can it be easily attributed to a certain area in the car? Does it happen more at certain road speeds? Does listening to the car stereo have any effect on the fault? If a speaker vibration, is it more pronounced when listening to certain types or volumes of speech or music?

How? If a rattle, does it vanish when pressure is applied to the panel? If a visual dashboard fault, is it accompanied by certain systems becoming inoperative? Does opening the windows or sunroof cause the rattle to increase or disappear? Are the door pockets, glovebox and storage compartments free of loose items?

Some of the above questions may seem really obvious, but eliminating simple factors can be the key to the rapid location and cure of a problem that might otherwise be tricky to fix.