What is the fastest car in the world? 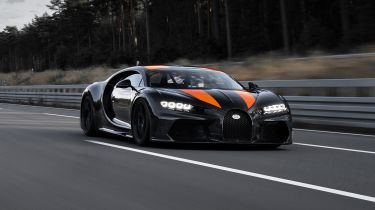 A car’s top speed is not often something we pay a huge amount of attention to here at Carbuyer; there are very few places in the world, let alone in the UK, where you can legally reach a car’s quoted top speed. However, we still can’t help but be interested in how quick the fastest production cars can go, given a long enough stretch of road, so we’ve compiled a list of the fastest cars in the world as it stands in 2020.

Often, a car’s top speed is nothing more than an arbitrary way of saying that one car is better than another, much in the same way as comparing 0-60 times. While these measurements may seem irrelevant to a car’s overall quality and appeal, the pursuit of higher and higher speed drives development across the car industry; cars become quicker, easier to control at speed and more economical - even if hitting such high speeds isn’t a regular occurrence for the majority of drivers.

When cars replaced the horse and carriage at the turn of the 1900s, their top speeds were barely any faster than walking pace. But the introduction of more models brought competition, and people inevitably raced them to see which was fastest. This led to motorsport, which bred further development for road legal cars. In the past, manufacturers with racing teams lived by the motto ‘win on Sunday, sell on Monday’, as buyers would be tempted by the models they saw competing in races. 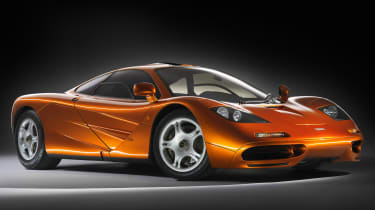 Another milestone was reached by the McLaren F1, the company’s first (and perhaps best-known) road car. In 1998, this three-seater V12 sports car scooped a Guinness World Record for the fastest car in the world, having hit 240.1mph. Fast-forward to 2020 and some cars can go even faster than that. The race to 300mph has really heated up over the past few years, and in 2019 one car cracked it. Read on to find out what it is.

There’s a car that’s gone even faster than that mentioned below but it’s powered by a jet engine; we’ll focus on production cars with conventional engines for our main list. We’ll also briefly explain how the fastest production car in the world reached its scarcely believable top speed.

What is the fastest car in the world?

The holder of the land speed record is currently the Thrust SSC, a British jet car that weighs nearly 10 tonnes. It has the equivalent of 102,000bhp and, in 1997, hit 763mph in a Nevada desert. Thrust SSC is the first car to officially break the sound barrier. There’s a car called Bloodhound SSC in development, which theoretically could reach 1,000mph, but its future is uncertain.

What’s the fastest road legal production car in the world?

To be officially recognised as one of the fastest cars in the world, a car needs to do a two-way run that yields an average speed. At least 20 examples of the car also need to have been produced. Here are the five fastest road cars in reverse order: 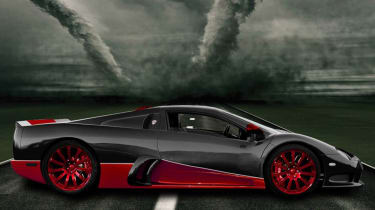 The SSC Ultimate Aero is powered by a 1,183bhp twin-turbocharged V8 petrol engine. During its seven-year production run, it managed to steal the fastest car title from the Bugatti Veyron with a top speed run of 256.18mph. It's also worth mentioning that this figure was achieved on a public road, with the car maker using a temporarily closed two-lane highway near its factory in the state of Washington, USA. 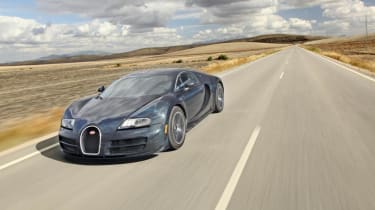 While the standard Bugatti Veyron wasn’t exactly slow with a top speed of over 253mph, the Veyron Super Sport sought to push the boundaries of physics slightly further with various aerodynamic tweaks and an increased power output of 1,184bhp (up from 987bhp). Limited to 30 examples, the Super Sport was successful in regaining the fastest car record from SSC in 2010 with a recorded speed of 267.86mph at the Ehra-Lessien test track in Germany. 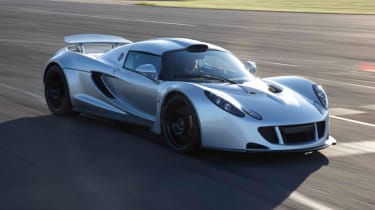 In 2014, American tuner Hennessey took the record back to North America with their Venom GT hypercar. The record run was completed on the 3.2-mile runway at the Kennedy Space Centre in Florida, with a one-way recorded speed of 270.49mph. Controversially, a run in the opposite direction was never completed, meaning the attempt didn’t qualify as an official world record. 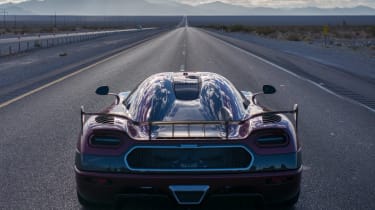 Koenigsegg upped the ante in 2017 by increasing the speed record even further still, while simultaneously recording the highest speed ever achieved on a public road. Using a closed 11-mile stretch of highway in Nevada, USA, the Swedish hypercar maker ran a customer-owned Agera R to a speed of 277.87mph. Not only was the car borrowed from a customer but it was also unmodified, producing 1,360bhp in its factory specification. 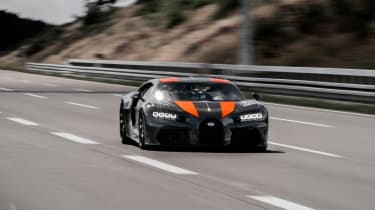 In 2019, Bugatti regained the world’s fastest car accolade with the Chiron Super Sport. Like the Veyron Super Sport before it, only 30 examples are slated for production, with the car managing to hit 304.77mph at the Ehra-Lessien test track.

How is the Bugatti Chiron Super Sport so fast?

The Bugatti Chiron Super Sport is powered by a tweaked version of the standard Chiron’s 8.0-litre W16 engine, which itself was used in the Bugatti Veyron from 2005 onwards. It might be easier to think of the engine as two 4.0-litre V8s joined together, which then has four turbochargers bolted on. Total power stands at an astonishing 1,578bhp - 99bhp more than the ‘regular’ Chiron. Amazingly, the four-wheel-drive system and gearbox are unchanged.

The Chiron Super Sport is 25cm longer than the standard car, and has a range of aerodynamic changes to reduce drag. That’s vital at such high speeds, as the air resistance at over 250mph means acceleration becomes very difficult. Bugatti also removed the rear wing and airbrake, redesigning the back end so both are incorporated into the tailfin. 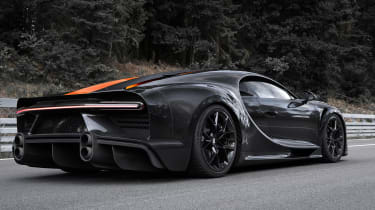 Some more mind-boggling stats: driver Andy Wallace used full-throttle for a whole 70 seconds, and at top speed the Chiron Super Sport covers 136 metres every second. That’s the equivalent of just over five miles a minute.

Read our guide to the best drivers’ cars on sale now, or check out our guide to keeping your tyres in top condition.