The Vauxhall Meriva doesn’t do well in our Driver Power customer satisfaction survey, but the safety experts at Euro NCAP say it will perform well in a crash.

In our 2016 Driver Power owner satisfaction survey, the Meriva came in a disappointing 145th place. It's been rated well for build quality and seat comfort, but reliability is a concern for some owners and handling isn't impressive.

The Meriva didn't feature in the 2017 survey – too few owners participated – but Vauxhall itself finished in a lacklustre 23rd position out of 27 carmakers covered, although none of the brand's category scores were disastrous on their own. Owners were generally happy with the engines, infotainment and fit and finish of their cars, but thought visibility and seat comfort could be better. Reliability was ranked 20th overall, though only 10.6% of owners reported any faults within the first year of ownership. 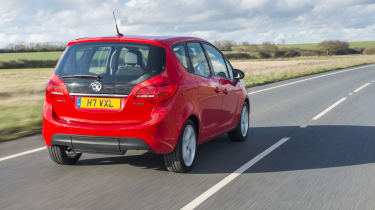 The Meriva scored a full five-star rating in the Euro NCAP crash-test programme. The organisation awarded it 89% for the way it protects adults and 77% for child protection. A score of 86% for safety technology was a good result in 2010 and is still very competitive today.

The Meriva’s Adaptive Forward Lighting system was singled out for praise. During cornering, the system illuminates more of the road in the direction the vehicle is heading.

Standard safety features include traction control and electronic stability control, as well as a range of airbags, although you need to choose an Club model or above to get curtain airbags and headrests (which can reduce whiplash in a crash) as standard. These features are available as part of the £500 Protection Pack on all other models. A headrest for the centre rear seat is also available for £30 for most models.