"The Fox is a great first car, thanks to compact dimensions and excellent driving manners. It’s not as posh inside as modern Volkswagens, but it’s spacious for its size and cheap to run." 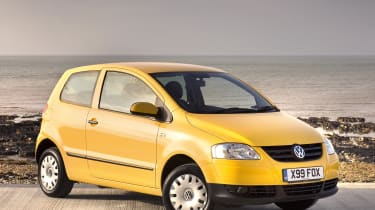 The Volkswagen Fox is, in many ways, the perfect first car. It’s easy to manoeuvre and park, and is compact enough to squeeze through the narrowest gaps in traffic. It also has accurate steering and a smooth gear change. When new, just two trim levels were available - the standard car, called simply Fox, and the better-equipped Urban Fox model. Both offer less equipment than contemporary rivals such as the old Toyota Aygo and Ford Ka. At least the Fox is cheap to buy, although you can’t expect to have the same interior quality as modern VWs. It might be a city car, but you get a surprising amount of cabin space, particularly headroom, of which there is lots.

It’s cheap to run, despite the lack of a diesel engine 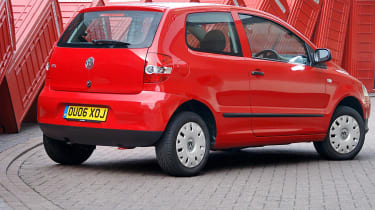 The 1.2 and 1.4-litre petrol engines return 46.3mpg and 42.2mpg respectively, and they’re in very low insurance groups, so are cheap to run. Which partly explains why there’s no diesel option - city cars rarely cover the miles you’d need to do to justify the extra cost of owning a diesel. CO2 emissions are a respective 139g/km and 159g/km, which is pretty poor compared with modern city cars. That means, in turn road tax is more expensive than you might think for such a small car.

It’s a nippy thing, as long as you stay in town

Urban areas are the Fox’s natural habitat, thanks to accurate steering and a slick gear change complementing supple suspension. Visibility is also good, so it’s easy to manoeuvre and park. Stick to roads in town and the two petrol engines - even the 1.2 petrol - feel nippy. However, head for the motorway and both engines become noisy at higher revs. You’ll also hear a lot of wind noise from around the door mirrors and windscreen. However, body roll is well controlled on roundabouts, so the car always feels sure-footed and safe.

Inside it’s roomier than its contemporary rivals 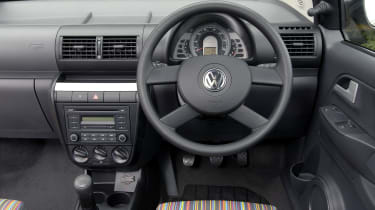 The amount of cabin space Volkswagen has squeezed from the Fox’s compact design is surprising. It’s roomier than rivals such as the previous-generation of Citroen C1. The rear seats are set low and the roof is high, so there’s plenty of space for heads and legs - front and back. However, entry-level cars don’t get front seats that slide forward for easier access to the rear.

The Fox comes with only three doors and the front chairs make it awkward to reach the rear seats. Split-folding rear seats that slide back and forth are fitted to top models, but you had to pay extra to get them on the entry-level car. The Fox has a relatively big boot though, and the rear bench seat folds down easily. Combined with the hatchback and the Fox’s tall, square body, it has good carrying capacity for such a small car. Bear its three-door body style in mind if you regularly carry rear passengers. 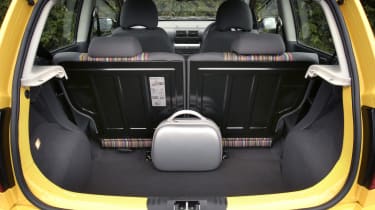 It feels well made

The Brazilian-made Fox was introduced in 2006 and was made until 2012 but wasn’t subject to any UK recalls. Despite the low-cost appearance of the cabin, it feels robustly built and there have been no major buyer complaints. Many of the Fox’s parts and electrical components are based on the larger Volkswagen Polo of the time, and has proved generally reliable.

Even basic features such as opening rear windows weren’t standard

The used price of the Fox is on a par with, or cheaper than, other new city cars. However it’s sorely lacking in equipment. Even basic features such as opening rear windows were either cost options or available only in the more expensive Urban Fox when it was new. Air-conditioning cost more than £1,000 and safety equipment such as side airbags and traction control was extra too. So if you find a car with these fitted, it’s a bit of a bonus. It’s a well built car, but the Fox is far from luxurious.