"You won’t notice many Volkswagen Phaetons on the road – yet this luxury limo could be worth a closer look.” 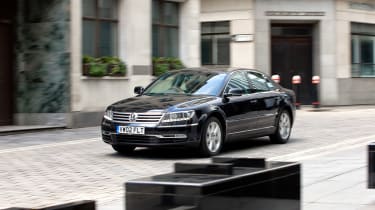 If your average car buyer hasn’t heard of only one Volkswagen model, it’s probably going to be the Phaeton. Or the Eos, but more likely the Volkswagen Phaeton. That’s no reflection on the car itself, it’s just that the names Golf, Polo and Passat, even Touareg are so visible on the UK roads. In comparison, the Phaeton, VW’s luxury limousine, is a rare sighting and has struggled against its Audi and Mercedes competitors since its launch more than a decade ago back in 2002. But, as the hand-built VW flagship car, the Phaeton is a high quality vehicle that offers lots of luxury, equipment and interior space. It’s available in short or long-wheelbase four-wheel-drive form, and comes equipped with a 3.0-litre V6 diesel engine. Its last facelift added some subtle visual tweaks to better fit it in with the rest of the company's range.

The Phaeton’s 3.0-litre V6 TDI 4MOTION diesel engine is only capable of returning a meagre 32.2mpg and emits a huge 224g/km of CO2. That’s not kind to either the environment or your wallet, frankly. Repairs won’t be cheap, insurance won’t be cheap, and even cleaning it, given its bulk, probably won’t be cheap.

You only get one choice of engine in the aging Volkswagen Phaeton saloon – a 237bhp 3.0-litre TDI 4MOTION V6 diesel engine that’s certainly powerful, going from 0-62mph in a speedy 8.3 seconds. Its smooth-shifting six-speed automatic gearbox is pleasingly effective, as is the four-wheel drive, which provides plenty of control and grip on the road. The adaptive air-suspension set-up is designed to constantly adjust its settings to make the car comfortable whatever the road surface, which it does an excellent job of. That level of comfort, however, means there’s quite a lot of body roll in the corners, which is made worse by the sheer weight of the Phaeton’s large dimensions. Nimble it isn’t.

A smooth ride and lush interior

You could never accuse the VW Phaeton of skimping on comfort. Sumptuous leather and wood trim greets you inside the car, and you’re surrounded by lots of equipment, gadgets and accessories that are fitted as standard. The mood in the car is suitably luxurious, with a very effective four-zone climate control system to keep each occupant at their preferred temperature, plus heated and electrically operated front seats to further bolster the pampered mood. Anyone sat in the back has loads of room to stretch out in, particularly in the long-wheelbase model – its 120mm of extra length adds significant added legroom.

A big boot, but it's lacking in some areas

Offering 500 litres of luggage space, the Phaeton’s boot is certainly on par with its many rivals in the segment, being the exact same capacity as you’ll find in the BMW 7 Series and Audi A8. The interior is very spacious, as you’d expect from a premium luxury car, but while overall comfort and convenience technology do impress, certain key areas could do with some improvement. This is a big car, so it would be very useful for VW's clever self-parking technology to be fitted on top of the parking sensors that are included as standard. Also, the foot-operated parking brake is now very outdated – VW would be well advised to replace it with an electric system as soon as possible. There’s loads of room in the back for adult passengers to stretch out, while the interior is so well insulated you’d hardly know you were on the road. The seats can be adjusted 18 ways (yes, 18 ways) and have a massage function, while you also get sat-nav loaded with Google Maps included as standard.

The Phaeton is both too old and too obscure to feature prominently in the 2013 Driver Power customer satisfaction survey. VW itself managed to rank 16th in the poll’s manufacturers list, which is surprising low considering Volkswagen’s supreme reputation for reliability. One step in addressing that lapse in customer happiness is likely to be to remove old dogs like the Phaeton from sale, but that said, you’re still unlikely to encounter any problems with either its engines or gearbox. Of course, as with any luxury car designed to spoil its passengers, there are more gadgets than usual, which means more potential for things to go wrong, but only a few owners have complained of some minor electronic glitches that are easily fixable. But, again, VW’s renowned design and engineering standards should provide at least some reassurance. If you need a bit more of a confidence boost, VW’s three-year warranty should also bring further peace of mind. That peace might be tested by the lack of a Euro NCAP crash safety rating, however. The Phaeton does come with driver, passenger, side and curtain airbags, electronic stability control and anti-lock brakes fitted as standard, so should prove to be pretty safe, but it still hasn’t been tested and is now unlikely to be, because it would be unlikely to ace the tests compared to newer, more cutting-edge competition.

Well, it’s not good value for money, basically. Compared to rival limos and premium cars from Mercedes, Jaguar, Audi and BMW, the Phaeton is definitely well equipped and seemingly well priced. However, those rivals do offer even more advanced technology and greater desirability for those out to impress. It may be better than your living room inside, but outside it is still a Volkswagen, which doesn’t exactly scream super-luxury. We won’t even go into the Phaeton’s resale value on the used car market, or you might feel faint. So, you may get a lot for your money initially but, far from actually boosting its desirability, the Phaeton’s low sales numbers mean it isn’t particularly sought after. As a result, buyers will take a hit when they come to sell it on.