"Achingly stylish, well made and very comfortable, but not as big as a Volvo estate should be" 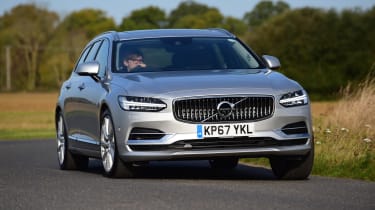 The Volvo V90 Twin Engine is a plug-in petrol hybrid estate that rivals large executive estates like the Audi A6 Avant, BMW 5 Series Touring and Jaguar XF Sportbrake. The Volvo stands out in its class as being the only plug-in hybrid that’s available in estate format and sits at the top of the current V90 range.

Powered by a four-cylinder petrol engine and an electric motor, V90 Twin Engine produces 407bhp, yet an official economy figure of 141.2mpg and CO2 emissions of just 46g/km mean you can have your cake and eat it when it comes to performance and running costs.

As is the trend with the latest generation of Volvos, the V90 prioritises comfort, luxury and passenger space over all else. While quick, it’s not as sharp to drive as its sportier rivals – but it is the perfect alternative if wafting along in serene comfort is more important to you than out-and-out driving involvement.

Beautifully designed inside and out, the V90 is one of the most stylish estates on sale. Paired with its unique combination of hybrid power and comfort-orientated set-up, the Volvo V90 T8 Twin Engine is a high-quality executive car with an individualistic edge and reasonable running costs for its size, weight and power.

Not likely to be as frugal as figures suggest, but low CO2 emissions are welcome

The Volvo V90 T8 Twin Engine is not only the most powerful version of the car on sale, but it’s also one of the most economical. As with all plug-in hybrids, it’s best to take official figures with a pinch of salt – getting anything near the official figure will require a light right foot, fully charged batteries and just the right combination of roads. Over short distances or in and around town, though, the T8 makes a sensible choice – especially given that it’ll travel 28 miles on electric power alone. 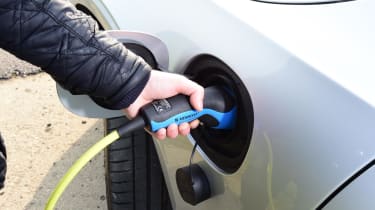 Road tax in the first year is free thanks to the T8’s very low CO2 emissions of 46g/km. After that, you’ll pay £130 a year, plus the £310-a-year surcharge for cars with a list price of over £40,000 – a threshold the T8 Twin engine easily exceeds. That’ll bring your total annual bill in years two to six to £440. Company-car users stand to benefit from the V90 T8’s low 9% Benefit-in-Kind tax rate, which matches its saloon-only plug-in rivals from BMW (530e) and Mercedes (E350e).

All Volvos are subject to a three-year/60,000-mile warranty, whichever comes first. The lithium batteries fitted to the T8 Twin Engine benefit from an eight-year warranty, with any ‘material defect’ fixed for free within that period. However, Volvo states that the loss of battery capacity over time is normal and so this is not covered.

Thanks to its very low CO2 emissions, the Volvo V90 T8 Twin Engine is exempt from the London Congestion Charge.

It weighs in at over two tonnes, but with 401bhp on tap, the Volvo V90 T8 is a swift car. That considerable weight means it doesn’t feel quite as fast as the official 4.8-second 0-62mph figure would suggest, even with the ‘Power’ driving mode selected for optimum acceleration. The T8 isn't a hybrid hot-rod then, but there’s plenty of overtaking punch on tap and it's more than fast enough for a large family car.

The V90's weight shows in corners, too; its steering and suspension are aimed more at providing a cosseting ride than pure driver engagement. Quite simply, this is a car for covering distance swiftly and in comfort, rather than having fun on your favourite road. It’s not as sharp to drive as a BMW 5 Series Touring, but a good all-rounder nonetheless.

At low speeds, the V90 T8 defaults to Hybrid mode and offers a remarkably hushed experience around town; if you select Pure mode, all-electric power can be maintained up to 78mph – although you’ll have to travel much slower than that to eke out the full 28-mile electric range.

Minimalist yet luxurious, well-built and stylish

You could be forgiven for choosing the Volvo over its rivals based purely on its fantastic interior. It’s beautifully designed, very well built and completely different from anything else in its class. It’s a level of luxury that’s perfect for making long journeys effortless; very comfortable seats, sumptuous leather trim and low road and wind noise make the V90 a very relaxing car to travel in. In fact, It’s worth specifying your V90 T8 Twin Engine to make the most of its luxurious leanings – choosing 18-inch wheels instead of 19-inch ones maximises ride quality, while optional active air suspension adds an extra layer of comfort. 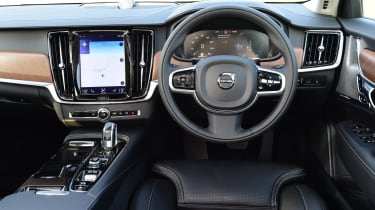 A minimalist, undistracting dashboard layout is a unique selling point for the Volvo V90. The majority of major functions are controlled by a simple-to-use central touchscreen that’s not too dissimilar to a tablet. Volvo only offers the T8 Twin Engine in Inscription and R-Design trims, plus their ‘Pro’ versions, which add even more equipment. Both add nicer leathers and a 12.3-inch display in place of traditional dials behind the steering wheel; these are easy to read and can even display information like sat-nav directions. Inscription Pro brings massaging front seats for the ultimate luxury touch.

Not as big inside as previous Volvos, but still practical

The back seats in the V90 T8 Twin Engine are very comfortable and offer their occupants plenty of leg and headroom, and while there’s enough space for three adults, the centre seat probably isn’t the best long-distance proposition. There’s a flip-down centre armrest that makes the back seats even more appealing when four-up. 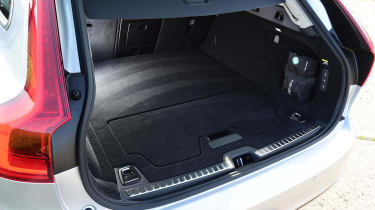 Volvo is a name synonymous with boot space, but oddly the V90 lags behind its rivals in this department – though space is good with the seats up, the Audi A6 Avant, BMW 5-Series Touring and Mercedes E-Class estate all offer more seat-down space. However, the V90 makes good use of what it has, with a very low load lip and a practical, squared-off boot space that makes loading items easy. Remarkably, the hybrid T8 Twin Engine doesn’t give any boot space up to its batteries – it’s also the only hybrid estate in its class, as its rivals’ hybrid versions are only available as saloons.

Undeniably safe in all respects, but unproven reliability

The Volvo V90 T8 Twin Engine is too new to have featured in our Driver Power 2017 customer survey, but Volvo finished an impressive seventh place out of 27 manufacturers, scoring well for seat comfort, infotainment and its engines and gearboxes. The average share of owners surveyed who reported a fault with their car was just 15.7%. So while Volvo’s track record bodes well, only time will tell if the V90 T8 Twin Engine will prove reliable in the long run.

One certainty is that the V90 T8 Twin Engine is safe. Volvo has long had a reputation for industry-leading safety features, so it comes as no surprise that the V90 is packed full of modern active safety systems to help prevent accidents. These include automatic emergency braking (AEB) and a version of adaptive cruise control that can drive the car semi-autonomously on the motorway with automatic use of the steering, brakes and engine, all at speeds up to 80mph.

Euro NCAP awarded the V90 a five-star rating, with an impressive 95% score for adult occupant protection.

See how this car performed on our sister site Driving Electric