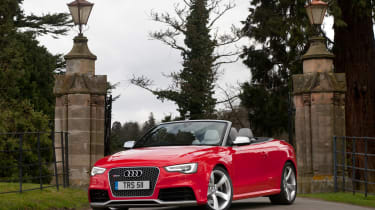 The Audi RS5 Cabriolet is based on the RS5 coupe and comes with the same 4.2-litre V8 engine as the Audi R8 supercar. With 444bhp on tap and a fast-shifting automatic gearbox, it’s a very quick car, while Audi’s grippy quattro all-wheel-drive system makes it very easy to drive in all conditions. With the roof down, you can really can get a sense of that speed, yet when it's raised the Cabriolet is just as quiet and comfortable as the coupe – although a slightly smaller boot reduces practicality. Still, the RS5 looks every inch a performance car, with a range of styling upgrades to set it apart from the regular Audi A5 Cabriolet.

It’s expensive, but it does have a powerful 4.2-litre V8 engine

Audi says the RS5's fuel economy of almost 27mpg is impressive considering the performance available, but if you do use all that power, it’s unlikely you’ll get near even this modest number. The annual tax bill is a hefty £490 and other running costs such as maintenance and insurance costs are sky-high, too.

Fast, but not as much fun as you’d think

With a 0-62mph time of 4.9 seconds, this is a very quick convertible. What’s more, the RS5 Cabriolet is very easy to drive, because the quattro four-wheel-drive system and various mechanical and electronic traction control systems help glue the car to the road whatever the weather. And when you want to take things slowly, you can reduce the throttle response, slow down the gearchanges, soften the suspension and make the exhaust quieter at the touch of a button. All this gives the car a bit of a split personality. However, there's a trade-off for being able to lower the roof. Due to necessary extra body strengthening, the RS5 Cabriolet weights 205kg more than the coupe version and so doesn’t handle quite as well.

Good with the roof up or down, but the ride is firm

You can lower and raise the fabric roof of the RS5 Cabriolet in 20 seconds at speeds up to 31mph, so there’s no need to stop and pull over should the heavens suddenly open. With the roof up, the car is quiet at speed and when it's down and the wind deflector's in place, there's minimal buffeting. The sports seats are very supportive, although those in the back are too cramped for adults. Also, some people may find the suspension too firm – even in Comfort mode. What's more, whenever you drive over a bump, you can sense the car’s body flexing – a common issue with convertibles.

Cramped back seats but a decent-sized boot

Convertibles are never the most practical cars in the world and, as with other cars in this class, the RS5 has tight back seats with limited legroom and – when the roof is up – tight headroom. The boot is of a reasonable size with the roof up and only 60 litres smaller when it's lowered. There are also sufficient storage cubbies dotted about the interior.

Audi makes solid cars and this is no exception

This is a car that oozes quality – everything you touch has that reassuring Audi built-to-last feel, with robust switches and thick plastics adorning the well screwed-together interior. Thankfully, Audi’s reliability suggests the quality isn’t just skin-deep and the V8 engine is pretty bulletproof, as it's been tried and tested in many other models. The RS5 Cabriolet also has lots of safety equipment, including six airbags, electronic stability control and huge brakes.

This is the RS5 cabriolet's Achilles' heel. Costing from just under £69,000 before any options, it’s £10,000 more expensive than the RS5 coupe, which is a better performance car due to its stiffer and lighter body. Really, if you want a fast four-seater convertible, we'd recommend saving yourself around £23,000 and buying the cheaper Audi S5 Cabriolet. It's almost as quick and – thanks to its smaller V6 supercharged engine – considerably cheaper to run.