"The Audi S5 Sportback is fast, luxurious and relatively economical but it's not hugely exciting" 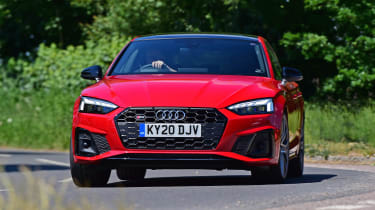 The latest Audi S5 Sportback is an unusually extensive midlife update of the previous model. Along with all the styling changes, revamped lights and upgraded technology you'd expect, there's also the introduction of a diesel engine in place of the petrol V6.

Audi has given the S5 its latest 3.0-litre, six-cylinder TDI diesel with one major innovation. To rid its sporty executive models of the dreaded 'turbo lag', the engine is now fitted with an electric compressor. This can send pressurised air into the cylinders at low revs in milliseconds, long before the exhaust-gas-driven turbocharger takes over. From behind the wheel, it simply feels like driving a car with a bigger, more responsive engine - one that races through its eight-speed automatic gearbox, getting from 0-62mph in 4.9 seconds.

Fitted with sports suspension, the S5 Sportback also impresses on British B-roads, as well as the faster roads that are its typical stomping ground. Quick responses and grip make it a car that can be confidently driven quickly, albeit one that doesn't feel quite as playful as the BMW 4 Series Gran Coupe or Kia Stinger.

The interior is filled with the latest infotainment tech, giving it a modern feel and ensuring it's easy to connect to your smartphone. There's also a set of 'S' graphics for the digital Virtual Cockpit, with plentiful driving information at your fingertips. Supportive seats and excellent build quality help justify the Audi's steep price tag, along with touches like its carbon fibre trim. 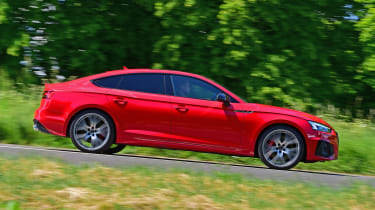 Four doors and a large hatchback also make the S5 Sportback as practical as it is rapid. There's decent room in the back, even for adults, and getting in and out is far easier than the two-door S5 Coupe. While not massive, the 460-litre boot is also made more versatile by its large hatchback.

While it may have come as a surprise to some S5 fans - this car was fitted with a petrol V8 a mere two generations ago - the switch to a powerful diesel is logical from an efficiency standpoint. Many S5 drivers use their cars to rack up serious motorway and A-road miles, and it's during this type of driving a diesel makes most sense. 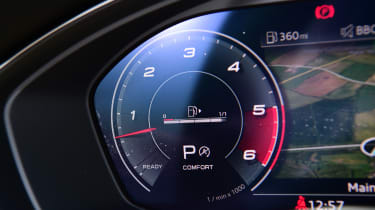 Once up to full operating temperature (which typically takes longer to achieve than a typical petrol engine), the S5 Sportback can return up to 40.4mpg. That's enough to give it the edge over some of its key rivals; the 4 Series Gran Coupe 440i returns 34mpg. CO2 emissions aren't so impressive, with 183g/km placing the S5 Sportback firmly in the highest Benefit-in-Kind band for company-car drivers. A 58-litre fuel tank gives the S5 Sportback a range of around 515 miles.

Thanks to its 48-volt electrical system, the S5 Sportback is classed as a mild hybrid, harvesting energy into a small 0.5kWh battery pack under deceleration. Between 34 and 99mph it can coast with its engine switched off temporarily for up to 40 seconds.

Road tax costs £475 a year, dropping to the standard rate of £150 after the first five years. Buyers should also check insurance costs before making a decision, as 'S' badged high-performance Audi models don't tend to be cheap to cover.

For several years Audi teased that it was working on a new type of performance diesel engine, even inviting journalists to sample a working prototype. The S5 TDI is one of the first models with the new technology on sale. The biggest change is the use of an electric powered compressor (EPC), which can begin boosting the engine in milliseconds, improving power and response until the larger gas driven turbocharger can take over. This virtually eliminates the issue of 'turbo lag', a term used to describe when there's a pause between pressing the accelerator and the engine's power arriving. 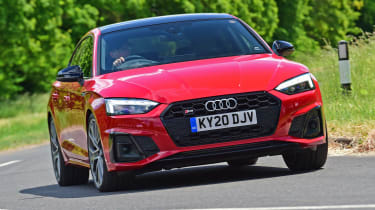 The 3.0-litre V6 engine produces 342bhp and 700Nm of torque, and while its 0-62mph sprint in 4.9 seconds is hardly slow, it's in-gear acceleration where it really shines. It feels like a big engine that's also impressively sharp at low revs, and feels smooth higher in the power band. 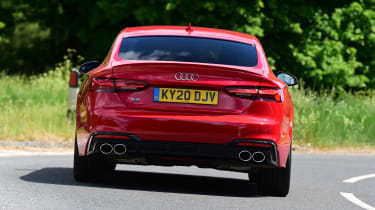 Driven on the motorway, the S5 Sportback feels as secure and settled as you'd expect. However, it's on more challenging back roads where the Audi surprises, offering agility and precision usually not found unless you opt for a full-on Audi Sport RS model. On our test car this was no doubt helped by the optional sport differential and 'dynamic' power steering, while the standard quattro four-wheel drive provides a safety net, even in poor conditions.

A stunning interior, but the ride can be slightly hard

Ride quality is adequate most of the time, but with the £1,000 sports suspension fitted, sharper bumps make themselves felt through the seats. 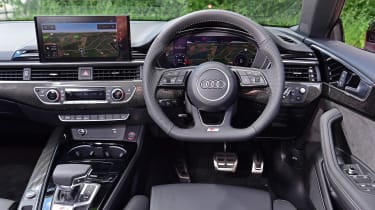 The interior is as impressive as you'd expect, and one of the key reasons to choose the Audi over a cheaper rival like the Kia Stinger. Carbon-fibre trim reminds you this isn't the more hum-drum A5 Sportback, and the combination of a 10.1-inch infotainment screen and 12.3-inch Virtual Cockpit means the S5 delivers from a technology standpoint. The MMI software is fast and offers plenty of useful settings and information, along with Apple CarPlay and Android Auto connectivity.

With four doors and a large hatchback, the Audi S5 Sportback is a sensible sports car

While the S5 Coupe arguably looks a bit more exotic, the Sportback version still cuts a dash, despite its extra doors. And the extra practicality can't be denied because it's a far better car for carrying passengers. There's decent headroom and legroom in the back, and getting in and out is straightforward too. 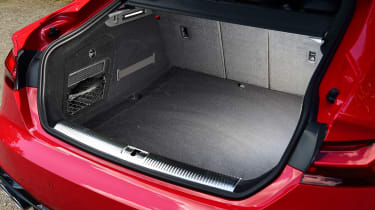 The 460-litre boot isn't massive but it's a close match for the BMW 4 Series Gran Coupe, and larger than the 406 litres in the back of the Kia Stinger. It also boasts a large hatchback, making it surprisingly easy to load bulky or awkwardly shaped cargo.

The Audi A5 Sportback upon which the S5 is based came 70th out of the top 75 cars in our 2020 Driver Power survey. It was rated poorly for reliability and build quality, with 16% of owners telling us they'd experienced a fault within the first 12 months. Owners also told us that servicing and costs including servicing were pricey, but there was a more positive response for acceleration, styling and interior design and build quality. 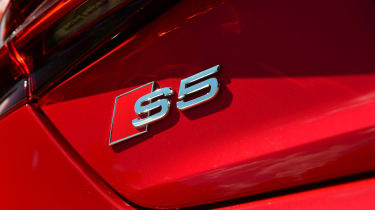 Safety experts Euro NCAP have based the A5's score on that of the Audi A4 because the cars share so much in common. This should also translate to the S5, giving it the full five stars. Safety features like autonomous emergency braking are fitted along with lane-keeping assistance, and features like rear cross-traffic alert (for reversing out of parking spaces) are also available.