Based on the Volkswagen Golf, the Audi TT uses a host of tried-and-tested parts

The Audi TT is renowned for being solidly engineered and built, and a lot of the components used in the TT are featured in other cars, so most of the kinks should have been long since ironed out. It has a good safety record too, with a strong construction and most of the safety equipment you'd expect in a larger car.

Inside the TT, build quality is second to none, with lots of high-quality materials used. While it may not look like a Volkswagen Golf, this car actually shares the practical hatchback's underpinnings, so a number of its parts have already been tried and tested in one of the UK's best-selling cars. None of the engines are completely new either, so reliability should be good.

Audi was ranked in 21st place (out of 30 car makers) in the manufacturer rankings for the 2020 Driver Power owner satisfaction survey, behind Jaguar (12th) but ahead of Mercedes (28th) and BMW in 27th. 20% of Audi owners told us they'd experienced at least one fault within the first year. 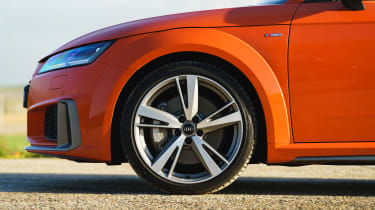 A few eyebrows will have been raised when the new TT only achieved four stars when it was crash-tested by Euro NCAP, but it's worth pointing out that the TT was the first car to be tested under new higher standards for 2015, and it's now a model coming towards the end of its lifecycle.

Euro NCAP cited a lack of the latest advanced technologies such as autonomous emergency braking, among other reasons, for the missing fifth star.

All TTs feature electronic stability control, a full set of airbags and ISOFIX child-seat mounts. TTS models come with a lane-departure warning system as standard. Blind-spot monitoring, traffic-sign recognition and a system to help you park in tight spaces are all available from the lengthy – and expensive – options list.