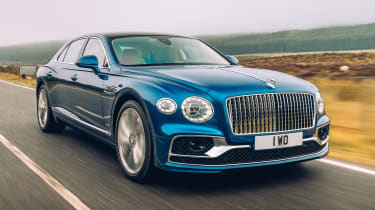 The third-generation Bentley Continental Flying Spur is fast, comfortable and has a wonderful, hand-crafted interior. It's the sort of four-door saloon that has to feel sufficiently opulent to owners who are potentially stepping off jets or yachts and straight into the car.

There’s also an assumption that Flying Spur owners might actually drive the car themselves from time to time, so it has to offer a rewarding driving experience as well as a comfortable back seat. New underpinnings shared with the Porsche Panamera pay dividends in this regard, as the Flying Spur now gets all-wheel steering and a powertrain that's predominantly rear-wheel drive. Power is only sent to the front wheels when it's needed, giving the latest Flying Spur a more playful feel that belies its weight, while active anti-roll bars help keep body lean in check.

Power comes from the latest version of Bentley's iconic 6.0-litre W12 twin-turbocharged petrol engine, with 626bhp smoothly deployed by an eight-speed automatic gearbox. It has a deep enough well of torque to hurl the Flying Spur from 0-62mph in 3.7 seconds and on to 207mph, with a relentless surge similar to that of an electric sports car. It's almost silent between 30 and 40mph. A smaller V8 petrol and even a plug-in hybrid are expected later on.

Measuring over 5.3 metres from its new rising and lowering Flying B bonnet ornament to its tailpipes, the Flying Spur is even more imposing now it has sharp creases along its flanks and 21-inch alloy wheels (22-inch items are optional). Stand closer and stunning details, such as the jewel-like structure inside the new Matrix LED headlights, become apparent. 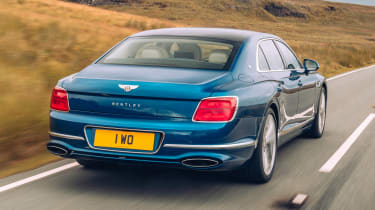 The interior is largely shared with the Bentley Continental GT, so along with the flawless quality of wooden veneers and finest leather quilted upholstery, technology also takes a big step in the right direction. A triangular centre panel rotates to life to reveal a hidden infotainment screen, while an LED stripe illuminates the interior at night. Back seat passengers get to enjoy electrically adjustable leather seats and individual screens to provide entertainment and Internet access.

While the Rolls-Royce Ghost is slightly more refined, keen drivers will find the Flying Spur much more enjoyable to drive, and that also goes for the Mercedes-Maybach S 600. In fact, it's this breadth of ability and performance that gives the Bentley its unique appeal. The fact it also has a sumptuous and infinitely customisable interior is the icing on the cake.

Fuelling the W12 engine isn't for the faint-hearted

You definitely don't buy a 6.0-litre W12 Bentley Flying Spur for the fuel economy, but it still needs to be capable of extended journeys without frequent stops. For this reason, its 90-litre fuel tank is around a third bigger than you'll find in most cars, extending the gaps between motorway services. It also means refilling the tank from empty will cost well over £100. 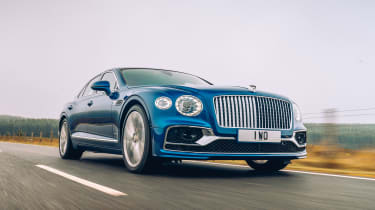 The Flying Spur manages just 19.1mpg while emitting well over 300g/km of CO2, despite the fact it can run in six-cylinder mode when less power is required. This places it in the highest band for company-car tax, while road tax costs £150 a year. That's after the higher rate of £475 has been coughed up in the first five renewal years, courtesy of the Flying Spur costing considerably more than the £40,000 threshold.

Bentley’s most striking accomplishment is the Flying Spur's incredible breadth of ability. Here's a car that can be as comfortable as a luxury limousine one moment, but handle far better than a 2.5-tonne saloon should in the next. Clever suspension takes a lot of the credit, because active anti-roll bars mean the Flying Spur stiffens up to resist roll in corners but softens up to soak up bumps when you're driving in a straight line.

All-new from the ground up, the Flying Spur is based on the same platform as the Porsche Panamera and Bentley Continental GT, gaining technology like all-wheel steering for the first time. This has the effect of making the Bentley feel like a smaller car at lower speeds by turning the rear wheels a few degrees in the opposite direction of those at the front. While the old Flying Spur had four-wheel drive that favoured the front wheels, this has been flipped for the new model, with power only sent to the front axle when the rear wheels start to lose traction. Comfort, Bentley and Sport driving modes bring sharper responses and a firmer ride, with Bentley mode offering the best blend of both, and while there's not a great deal of steering feel, it does have a fitting amount of weight. 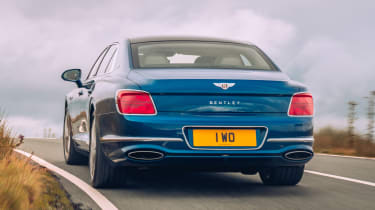 Despite the 626bhp and colossal 900Nm of torque produced by the 6.0-litre W12 twin-turbo engine, the rear wheels very rarely lose grip. There's little noise either, just a distant growl, but the way the Bentley gathers speed makes its claimed 0-62mph time of 3.7 seconds very easy to believe. The effortless surge and smooth climb up through the eight gears of the automatic gearbox is very different to the savage wail of the Ferrari GTC4 Superfast or Aston Martin Rapide S, and the Flying Spur feels easily as fast as a smaller BMW M5 or Mercedes-AMG E 63.

Later on, it's expected the V8 already available in the Bentley Continental GT will also be offered in the Flying Spur, while a plug-in hybrid model is also on the cards as part of Bentley's plan to electrify all its models by the end of 2022.

Simply put, the Flying Spur has one of the very best interiors found in any car. Not only does it contain the finest materials, but a good compromise has been struck between offering the latest technology without spoiling the cratsmanship for which the brand is known. The rotating fascia is a case in point, with a wooden veneer panel spinning to reveal the 12.3-inch infotainment screen or three analogue dials when in motion. It's just a shame the digital instrument panel doesn't look quite as pin-sharp as some from other brands, and some traditional customers may feel a set of Bentley's analogue gauges would look more special. 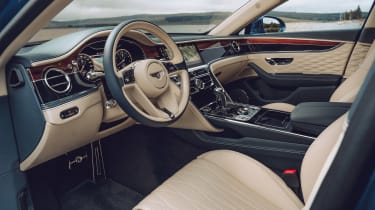 Apart from the centre console and air vents, most of the interior is shared with the Continental GT, and details like the organ stop vent controls and knurled dials help separate the experience of sitting in the Bentley from almost any other vehicle. Quality is taken to a different level, with each veneer coming from the same tree to ensure consistency and only the finest Bavarian cows used for the leather upholstery.

Where the Flying Spur really differs from the Continental GT is in the back, where legroom and comfort are excellent. You can also enjoy a pair of tablets giving access to the Internet, films and music, along with a remote control to set the climate control, monitor the speed you're travelling at and even deploy or retract the Flying B bonnet ornament.

Even at speed there's barely a murmur from the engine or the Flying Spur's huge 315mm wide rear tyres, while the suspension in Comfort mode seems to throw an invisible duvet over cracked roads, preventing disturbances from ever reaching occupants.

Unlike cars such as the Mercedes S-Class and Audi A8, the Flying Spur has been designed to be driven by its owner, so the front and rear seats are equally opulent. Interior space has been improved largely thanks to new underpinnings, shared with the Porsche Panamera, which have allowed the distance between the front and rear wheels to be extended by 130mm. 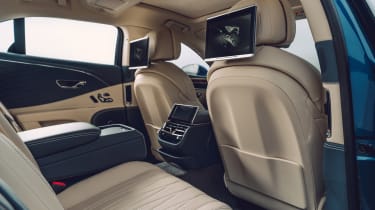 Bentley models don't crop up in our Driver Power owner satisfaction survey, but it's fair to say customers should receive top-notch service if they need it. It should also be reassuring the latest Continental GT is based on the same platform as the Porsche Panamera, which already enjoys an excellent reputation for performance and durability. Every Flying Spur is fitted with hand-crafted parts, takes much longer to build than a mainstream model and undergoes a painstaking inspection before leaving the factory. 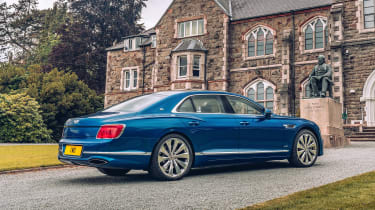 It's unlikely the Flying Spur will ever be crash-tested by Euro NCAP, but the closely related Porsche models that have been scrutinised have all passed with flying colours. The optional Touring Specification adds features to make long-distance driving safer, such as lane keeping assist, night vision and a head-up display. 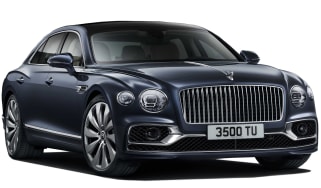 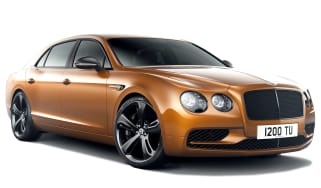 "The luxurious Bentley Continental Flying Spur is more about being driven, but it's plenty of fun from the driver's seat too."
Skip to ContentSkip to Footer