All BMW 2 Series are quick, while the M240i gives you Porsche Cayman-beating performance

The BMW badge on its bonnet means the 2 Series isn’t just a competitor for mainstream rivals from Toyota and Subaru; it also has to challenge cars like the stylish Audi TT and formidable Porsche Boxster and Porsche Cayman.

If you’re used to the handling of a front-wheel drive car the BMW 2 Series will probably put a bigger smile on your face than you’re used to. Even basic 2 Series models get the balance between handling and comfort just right, offering plenty of grip and giving you the confidence to push in corners.

Although there isn’t a lot of feel from the steering, it is at least well weighted and accurate, while there’s very little body lean in bends. The six-speed manual gearbox is precise to use, but the eight-speed automatic is even better. Not only does it improve fuel economy, it also seems to know exactly when you want to change gear. It’s standard on many models in the range and costs around £1,500 on the 218i, 218d and 220d models, and is an option that should add value come resale time. 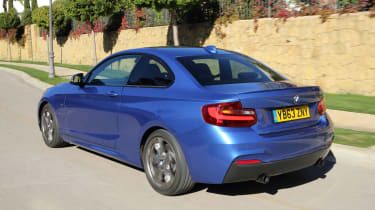 Even the basic BMW 218d diesel gets from 0-62mph in 8.5 seconds, while the BMW 220d does the same in 7.2 seconds. Both models offer the kind of mid-range power that makes them feel even quicker than those figures suggest, while the 220d also has the option of xDrive – BMW’s four-wheel-drive system. We’d only choose this if you feel the security of four-wheel drive is crucial and you often drive in slippery conditions, because the rear-wheel-drive model is more fun and cheaper. It’s also worth noting that the xDrive four-wheel drive 220d models are only available with the automatic gearbox.

The BMW 220i petrol engine arguably suits this sporty coupe even better than the diesel engines. It gets from 0-62mph in 7.2 seconds, while the now-discontinued 230i was even more potent and could hit 0-62mph in around 5.5 seconds. The basic model, the BMW 218i, now comes with BMW’s TwinPower Turbo engine, which achieves a 0-62mph time of 8.8 seconds.

The quickest 2 Series model by far is the M240i, which is priced competitively to take on the likes of the Porsche 718 Cayman. In fact, it costs less than the basic version of the Porsche while matching the Cayman S for performance. Its six-cylinder engine sounds great and gets the car from 0-62mph in just 4.6 seconds, on the way to a limited top speed of 155mph. While it’s extremely good fun to drive, the M240i can’t match the composure of the 718, which has race-bred brakes and even more grip in corners.