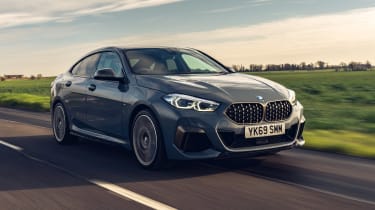 German manufacturers have turned to filling every niche to attract customers, and the BMW M235i Gran Coupe is one of the most extreme examples on sale.

A four-door saloon with a curved roofline based on the same platform as the 1 Series, this is the high-performance model with a 2.0-litre turbo petrol engine able to send 302bhp to all four wheels. That gets the car from 0-62mph in 4.9 seconds, but with a somewhat flat and blaring exhaust note, we found the engine strangely unexciting. It certainly isn't as impressive as BMW's six-cylinder petrols.

Instead, it's the balanced and nimble handling of the M235i Gran Coupe that impresses the most. The driver should find it confidence-inspiring and involving - and the car is even quite playful in corners.

Like the Mercedes-AMG CLA 45, which is its biggest rival, the Gran Coupe also strikes an interesting balance between style and practicality. Four doors and a reasonably roomy interior mean there's space for adults to travel in comfort, while its 430-litre boot is actually 50 litres bigger than found in the 1 Series hatchback thanks to its extra length. 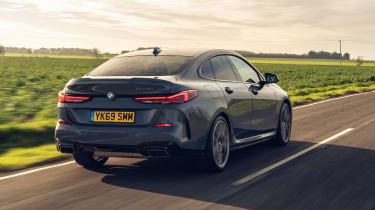 BMW's interior design has improved in recent years, and Gran Coupe occupants are greeted with a modern, high quality dashboard. Digital infotainment and instrument displays with pin-sharp graphics add to this upmarket feel, even if some of the cheaper plastics dotted around are only just acceptable in a car that can easily cost over £40,000.

The M235i Gran Coupe has the odds stacked against it in the running costs department, given that it’s a performance model with a big turbo and four-wheel drive. However, technology has come a long way in the past 20 years, as attested by its 37.2mpg fuel-efficiency figure - a much more respectable one than something like a Subaru Impreza WRX STI used to manage. 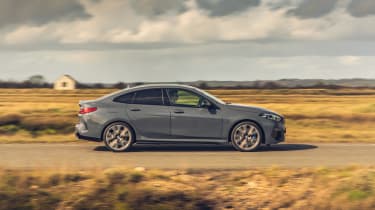 Clever fuel injection, four-wheel drive that's front-wheel drive until you need extra grip and stop/start are just some of the features fitted to help it save fuel. They can't completely keep a lid on tailpipe emissions, though, and 153g/km of CO2 will keep the M235i Gran Coupe off most company-car lists. Road tax will cost £145 a year, unless the price (including options) heads over £40,000, in which case it's £465 in the first five renewal years. Insurance is likely to be expensive because of the car's performance.

The car is fast and handles well but the 2.0-litre engine lacks character

With the same 302bhp, 2.0-litre petrol turbo engine as the BMW M135i hot hatch, the 0-62mph sprint is over in 4.9 seconds and a top speed of 155mph is possible. Sadly, this speed isn't backed up by the sound it produces, with a droning exhaust note that's not vastly improved by the fake engine noise pumped into the interior. Its power delivery fails to excite too because it doesn't reward high revs. 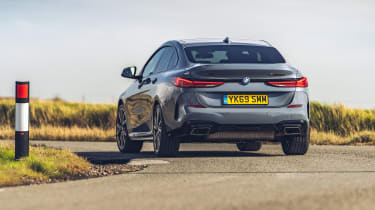 The handling is more impressive, with superb agility that doesn't feel corrupted by the four-wheel-drive system, along with lots of grip. Its steering could be even more precise, but this is true of all the current BMWs. It's also true to say, unless you're going on a track, a much cheaper 218i version feels just as nimble and its three-cylinder engine actually feels more rewarding to drive enthusiastically.

Despite being shared with far cheaper versions, interior quality still holds up

Tick a few option boxes and it's very easy to nudge the price of a M235i Gran Coupe well over the £40,000 mark, so it's important the interior feels great as standard. Luckily that's still the case and so long as you overlook a few cheaper plastics here and there, most of the fit and finish is first rate. The infotainment screen and digital dials also help because their graphics look particularly crisp, adding to the feeling you're sat in an upmarket car. 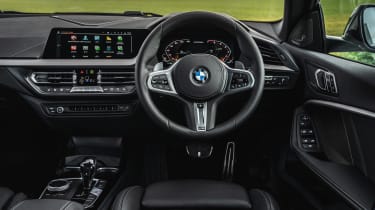 As standard, the M235i Gran Coupe is well-equipped, with 18-inch alloy wheels, an exterior body styling kit, M Sport front seats, Alcantara upholstery and exterior trim finished in 'Cerium Grey'. There are also quite a few packs on offer, from the M235i Plus Pack that includes 19-inch wheels, privacy glass and a Harman Kardon stereo, to a Tech Pack with adaptive LED headlights, a head-up display, wireless smartphone charging and a rear-view camera.

There's been a steady decline in the sale of saloons in the UK in recent years, but manufacturers have rushed to fill every niche, including the four-door coupe you see here. It's a rival to models including the Mercedes-AMG CLA 35, and aims to offer a fine balance between style and practicality. 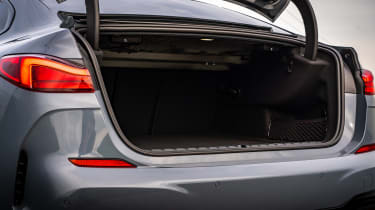 Adults should find there's just enough room in the back seats, while the 430-litre boot is actually bigger than the 380 litres in the hatchback. This fact is tempered slightly by the bootlid, though, because it's more restrictive than a taller hatch where the window also lifts up out of the way.

Based on the BMW 1 Series, the 2 Series sits on a recently developed platform for BMW, so we'll have to wait and see how reliable it proves to be. Despite being such a desirable marque, BMW has slipped in our Driver Power owners satisfaction of late, coming 25th out of 30 manufacturers in 2019. 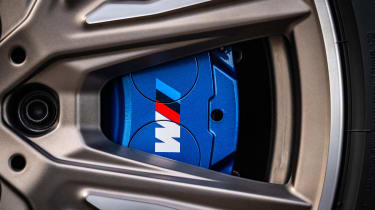 Just over 22% of respondents said their car had experienced one or more faults in the first year, and told us BMW running costs and servicing prices were on the high side. Build quality, performance and infotainment all came in for praise.

It's unlikely that safety will be a concern - after all, the BMW 1 Series scored five stars in Euro NCAP crash testing, with virtually identical safety kit. The Driving Assistant pack (costing around £1,000) adds additional safety equipment such as lane change warnings, rear collision prevention and speed limit information, and is well worth considering if you spend a lot of time behind the wheel.