The BMW 2 Series has a range of engines offering affordable running costs, and even the fast M240i won’t break the bank

BMW is keen to promote the 2 Series’ sporty credentials, but these haven’t come at the expense of fuel economy.

From 2018, every BMW diesel engine is fitted with AdBlue technology to reduce harmful emissions. While this makes diesel models cleaner, it’s disappointing that all 2 Series Coupe models sit in the top two bands for Benefit-in-Kind (BiK) tax for company-car drivers.

The diesel range starts with the BMW 218d, which returns up to 49.6mpg and emits 149g/km of CO2 under the stricter WLTP system, meaning the 2 Series is no longer a cost-effective option for business users. The BMW 220d, meanwhile, offers a blend of performance and economy that makes it a very popular model. Fuel consumption is exactly the same, so it shouldn’t cost any extra to run. Adding BMW’s xDrive four-wheel drive system on the 220d does reduce fuel consumption to around 45mpg, though. 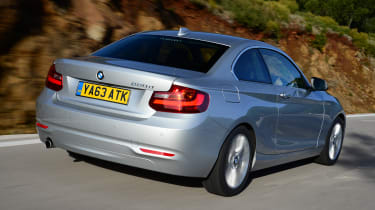 Like most manufacturers these days, BMW has reduced the capacity of its petrol engines and uses turbochargers to balance performance with fuel economy. The petrol model with the smallest engine, the 1.5-litre BMW 218i, can return 38.2mpg (or 37.7mpg as an auto) and emits around 170g/km of CO2, once again leading to high BiK bands.

As the M240i is aimed directly at driving enthusiasts, most buyers won’t be too concerned with fuel efficiency but, even if you’re not a keen driver, fuel economy of 32.5mpg isn’t bad for a car that produces 335bhp.

All BMW 2 Series will attract road tax of £150 a year, while those with a list price (including options) of more than £40,000 are liable for an additional surcharge of £325 a year from years two to six of ownership, bringing the annual bill to £475 during that period.

Being both sporty and upmarket hasn’t affected the BMW 2 Series’ insurance premiums too badly. Cheapest to cover are the 218i and 218d, which both sit in insurance groups 20 and 21 respectively. The BMW 220d M Sport sits in group 27, while the M240i’s prodigious performance means it earns a group-39 rating.

BMWs are frequently used by high-mileage fleet drivers, so the three-year/unlimited-mileage warranty the brand offers with all its models is much better than the 60,000-mile limit placed on Audi’s three-year warranty.

Buy a BMW 2 Series and BMW will let you pay for three years or 36,000 miles worth of services with a one-off payment from around £300, or you can now pay it in monthly instalments.