The BMW 2 Series coupe doesn’t look as distinctive as some rivals, but it’s more practical

While rivals like the Audi TT, Toyota GT86 and Porsche 718 Cayman have sportier looks than the BMW 2 Series, none is anywhere near as practical. The Porsche makes do with just two seats, while the rear seats in the Audi and Toyota are tight and claustrophobic.

The 2 Series has a bigger boot than the 1 Series hatchback and also beats the load capacity of family cars such as the Volkswagen Golf – although it can’t match a hatchback’s practical boot opening.

By giving the BMW 2 Series a conventional shape, BMW has sacrificed eye-catching looks in favour of a spacious interior. By fitting two individual rear seats, BMW has ensured the 2 Series only has space for two passengers in the back, but both of them enjoy plenty of elbow room, and the relatively large rear windows let in plenty of light, so it doesn’t feel claustrophobic. Taller passengers will find that headroom is cramped, though. 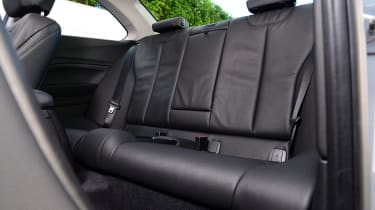 Up front, there’s plenty of space – even for taller adults – and BMW has kitted the 2 Series out with plenty of cubbyholes. Those include decently sized door pockets, a big glovebox, a centre cubby and two drinks holders in the centre console. 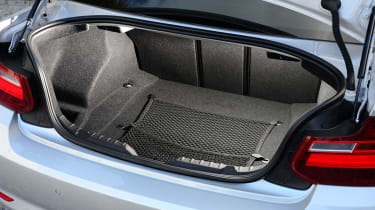 Holding 390 litres, the BMW’s boot is 10 litres bigger than those of the new 1 Series hatchback and the Volkswagen Golf. It also compares well with the boots of the Audi TT (292 litres) and Toyota GT86 (237 litres). Options that make the BMW even more practical include the Extended Storage Pack with nets for strapping down luggage and a through-loading system. The latter allows the centre of the rear seat to drop down so you can carry longer items like skis.