The BMW 1 Series received the full five stars from Euro NCAP, and the BMW 2 Series is likely to follow suit

The BMW 2 Series came 50th out of the top 75 models in our 2018 Driver Power owner satisfaction survey, with an average score for reliability and 16.5% of owners experiencing at least one issue in the first year of ownership. It hasn’t appeared in our surveys since (likely due to too few respondents), but the BMW brand was ranked a meagre 27th out of 30 manufacturers - behind Audi and VW but just ahead of Mercedes. 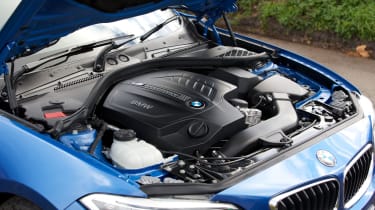 Euro NCAP hasn't crash-tested the BMW 2 Series yet, but the last-gen 1 Series on which it's based scored the maximum five stars and we'd expect the 2 Series to replicate that result. The 1 Series scored 91% for adult occupant protection and the passenger cell remained stable after a front impact. It also scored maximum points for protection of three-year-old infants.

As with its rivals, the BMW comes with a full complement of airbags, traction control and skid-preventing electronic stability control. All models also get tyre-pressure monitoring, automatic lights and windscreen wipers plus a speed limiter.

Active cruise control can be added for £790 (only on cars with an automatic gearbox) while for £390 you can order BMW’s ‘Driving Assistant’. This includes a forward collision warning, preventative pedestrian protection, a lane departure warning and an attentiveness assistant.