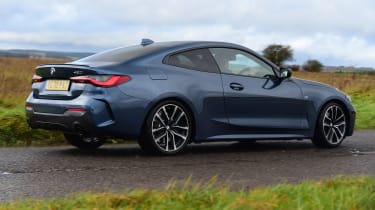 BMW tends to offer a wide range of engines, and there are plenty of petrol and diesel choices for the 4 Series. Choose the former and you can expect around 40mpg and a fairly high BiK band but many buyers are expected to take this route. Pick a diesel and mild-hybrid technology is fitted, helping push the mpg figure into the 50s, while sub-30% BiK numbers should also appeal to company-car customers.

While an all-electric 4 Series is very unlikely, customers looking for a zero-emissions version will be steered towards the BMW i4 - expected in 2021. A similar size, this is expected to boast an 80kWh battery, giving it an electric range of around 370 miles.

The petrol range kicks off with the 420i, which is powered by a turbocharged 2.0-litre petrol engine producing 181bhp. As the base petrol engine it’s one of the most efficient, with an official economy figure of 44.1mpg and CO2 emissions of 146-153g/km meaning it should be relatively inexpensive to run. During our test the 420i was impressively frugal, getting fairly close to its official numbers with around 35mpg possible in mixed driving and around 40mpg on longer runs.

Despite having more power, the similar engine in the 430i doesn't come with significantly higher running costs, returning around 42mpg. When the flagship M440i version arrives, it's likely to be very costly to run.

Unlike some manufacturers, BMW is sticking with diesel engines, and its 420d model should suit plenty of high-mileage drivers. Fitted with mild-hybrid hardware that recoups energy under deceleration, it returns up to 61.4mpg depending on the trim level, with CO2 emissions from 121g/km. A four-wheel drive xDrive option is also offered, dropping fuel economy by around 5mpg. A high-performance M440d xDrive is also due in 2021. 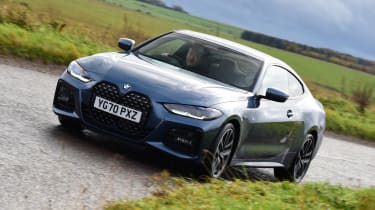 BMW offers buyers a three-year, unlimited mileage warranty, which also includes three years of roadside assistance. It's on a par with Mercedes and is slightly better than Audi, which imposes a 60,000-mile limit. It's also possible to extend the BMW's warranty at extra cost.

BMW models are fitted with sensors that monitor the car and determine when servicing is required. Visits for maintenance are usually no more than two years or 20,000 miles apart, but this varies depending on how the car is used and driven.