The BMW 4 Series is a practical coupe with room for four adults, plus it has a big boot

The BMW 4 Series is based on the BMW 3 Series saloon, so it’s a really practical coupe. Unlike smaller rivals such as the Audi TT, adults can sit in the back in comfort and the 4 Series has a 445-litre boot that can carry plenty of luggage.

With lots of steering wheel and seat adjustment on offer, anyone should be able to get comfortable behind the wheel and the 4 Series has a superb driving position. There’s a cubby between the front seats, a covered tray ahead of the gearlever and a decent-sized glovebox. The door pockets are thin, yet big enough to be useful. Headroom in the front is excellent and visibility is good for a coupe. 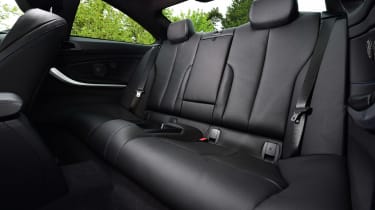 Other changes compared to the 3 Series saloon include frameless front windows. As you’d expect, going from four to two doors has made it more difficult to access the back seats, plus the coupe’s sloping roofline means there’s less headroom in the back. However, there’s still more than enough space for adults to travel in comfort.

Big enough for a couple of suitcases and plenty of shopping, the 4 Series’ boot has a 445-litre capacity – just 35 litres smaller than a 3 Series saloon’s. However, it’s 20 litres down on the Audi A5 Coupe, but the difference is marginal. 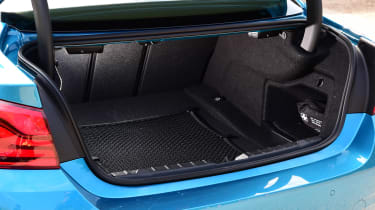 The BMW’s boot opening is wide enough for a set of golf clubs, although it also has quite a high lip, which means you can’t slide heavy objects in. Also, split-folding rear seats are optional, not standard. If you want a more practical option, BMW also sells the four-door 4 Series Gran Coupe, which has a bigger 480-litre boot.