While still comfortable, the BMW 7 Series is a bit more involving to drive than most large saloons

Unlike most BMW models, the 7 Series favours a plush ride over sporty handling, but it still feels lighter on its toes than the Audi A8 or Mercedes S-Class. This is partly thanks to use of a carbon fibre 'core' running through its underpinnings, which helps save weight and increase structural stiffness.

In any of its driving modes and any scenario, the 7 Series is incredibly comfortable. We found the normal Comfort mode to be the best all-round setting; Comfort Plus makes the air suspension even softer, but this can make the body feel a little wayward on demanding roads, so is probably best left for the motorway. 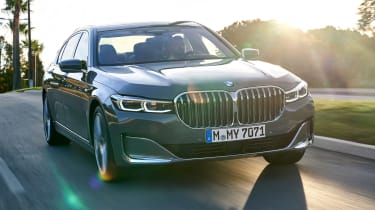 There are two versions of the same 3.0-litre straight-six diesel, and the BMW 730d is expected to be the bestseller in Britain. It has 282bhp and manages 0-62mph in 5.9 seconds when equipped with rear-wheel drive, with the xDrive four-wheel drive version taking 5.6 seconds. The more powerful four-wheel drive 740d gets 335bhp, and manages to get from 0-62mph in only five seconds. BMW’s mild-hybrid technology is fitted to both models, which provides an extra 11bhp overboost under full throttle to aid acceleration.

The petrol line-up consists of one relatively normal straight-six, and two much more expensive to run, powerful and exotic engines. With 328bhp, the 740i engine is shared with models including the BMW 3 Series and BMW 5 Series, and still proves spritely in a bigger vehicle, getting the 7 Series from 0-62mph in 5.5 seconds. 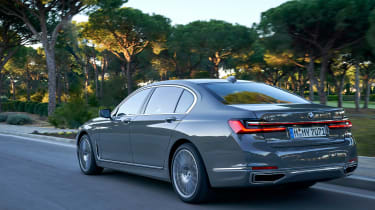 While the 730d looks set to be the model's mainstay at launch, the 745e plug-in hybrid could also be a hit for BMW. It combines a six-cylinder petrol engine with an electric motor and battery pack, providing an electric-only driving range of up to 28 miles. Zero-to-62mph takes a fraction over five seconds.