"The BMW 7 Series is great fun&nbsp;to drive, even if the suspension is too firm for a luxury car."

The BMW 7 Series is that rare breed: a luxurious and well equipped car that’s also fun to drive. Its rivals include the elegant and understated Audi A8, the luxurious Range Rover and the hugely capable Mercedes S-Class. It comes with a wide choice of engines: everything from the impressively economical 730d diesel (which does 50.4mpg and costs £145 a year in road tax) to the range-topping, money-no-object 760i with a V12 petrol engine (21.1mpg and £505 tax). In between is an ActiveHybrid version that’s actually less efficient and more expensive than the 3.0-litre diesel.

The 7 Series is as good to drive as the Jaguar XJ and Mercedes S-Class. Regardless of the engine chosen, it feels quick, too. Some well judged ride and performance settings, from comfort to sport, allow you to change the car’s character to suit the road and your mood. 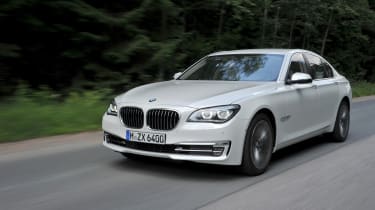 Inside, the 7 Series looks every inch the luxury car and is spacious enough for four large adults. A Range Rover will obviously be more practical, but the 7 Series has plenty of storage spaces, a roomy rear cabin and a low, deep and reasonably large boot.

There are five trim levels, ranging from the basic yet extremely well equipped SE, to M Sport. Even an SE owner will want for little, with full leather seats, Bluetooth connectivity, BMW’s iDrive infotainment system, climate control and a Bang & Olufsen stereo all standard.

The 7 Series feels extremely well built, so reliability shouldn’t be a concern. The car was never independently crash-tested by Euro NCAP, but given its size and suite of safety equipment (a full set of airbags, traction control and electronic brake force distribution, which helps you stay in control when braking heavily) it should protect you very well.

This version of the BMW 7-Series has now been replaced by an all new model. You can read our full road test here.