The engines on offer in the 7 Series have contrasting running costs. The most economical engine – a 3.0-litre diesel – manages an extremely competitive fuel economy figure compared to its rivals, while the 6.0-litre V12-engined 760Li costs more than £500 a year to tax due to its astronomical CO2 emissions.

Watch out for low resale value, as the 7 Series has historically depreciated very quickly. According to market experts, the top-specification 760Li will have retained just 29% of its purchase price after three years. On the plus side, the warranty is competitive and the servicing plans are less expensive than you might think.

The basic 3.0-litre diesel engine fitted to the BMW 730d is one of the most fuel-efficient engines available in a luxury car. Capable of returning 50.4mpg in the 730d SE, it also offers a low CO2 emission figure of 148g/km, so road tax will be £145 a year. It gives the Mercedes S350 BlueTEC diesel and Audi A8 3.0-litre TDI a run for their money and manages to outshine the 3.0-litre diesel used in the Jaguar XJ, too. 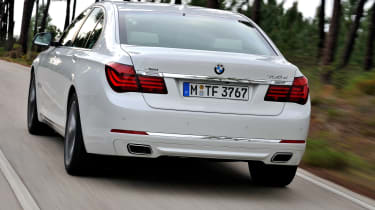 Despite its green intentions, the BMW 7 Series ActiveHybrid model can only manage up to 41.5mpg. It has an ‘ECO PRO’ mode that reduces power when cruising on the motorway. It can ‘coast’ at 70mph for a decent amount of time, but still isn’t as efficient as the diesels. It cost around £6,000 more than the 730d model, too.

The least economical engine is the V12 petrol found in the long-wheelbase-only 760Li. Fuel economy here drops to 21mpg and CO2 emissions shoot up to 314g/km, so the 6.0-litre V12 version costs £505 a year to tax. The purchase price also hits the £100,000 mark before any optional extras are fitted.

Predictably, insurance groups are high, with the majority of 7 Series models falling into groups 46-49, while the range-topping 760Li petrol models is in group 50.

Every BMW has a three-year/unlimited-mileage warranty as standard, with the option to extend that. Mercedes offers exactly the same, while both brands do better than Audi, which has a 60,000-mile limit on its three-year policy.

BMW servicing is good value, as the sheer number of UK dealers means there's lots of competition for custom, driving prices down. What's more, all 7 Series feature CBS (condition based servicing), which monitors the quality of engine oil and the amount of wear on key parts. So the more carefully you drive, the longer the car will go between services.