Thanks to the breadth of the BMW 7 Series' engine range, there should be a version to suit every customer and location. We say ‘location’ because the plug-in hybrid 745e will bring real advantages in terms of taxes and charges in cities like London with low-emission zones.

We expect the 745e plug-in hybrid to prove popular thanks to its CO2 emissions from 46g/km and fuel economy of up to 141mpg. The exact economy you get will depend on how often you can charge its battery pack and make use of its 28 mile electric range, but its fixed emissions figure gives the car free access to city centres with low-emission zones. A low Benefit-in-Kind (BiK) company-car tax will also appeal to business users. 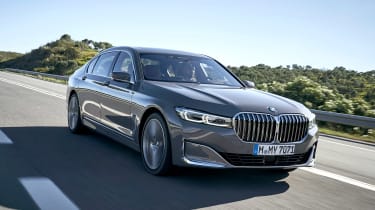 The 7 Series’ standard petrol models are considerably pricier to run. The 740i returns up to 34mpg and emits 189-208g/km, while the hugely powerful 750i xDrive and M760Li xDrive versions are likely to return little over 25mpg and 20mpg respectively and sit in the top BiK tax band.

Diesel engines are still expected to be very popular for the 7 Series, and the 730d will especially suit high-mileage drivers. Fuel economy of up to 50mpg is pretty impressive given the BMW's size, and emissions of 144g/km (with the smallest alloy wheels fitted) mean a mid-range BiK tax band. The 740d still returns 47mpg despite posting a very quick acceleration time. It features mild-hybrid technology with a small battery that stores the energy harvested from braking and deceleration, which is then used to give the engine a boost helping to improve fuel economy and emissions.

Insurance groups for the BMW 7 Series saloon are high because of how much it costs, the complex engineering and high performance. Even models lower down the range, such as the 740i and 730d, are in insurance groups 48 or 49. Every other model, including all long wheel variants and even the 745e hybrid, is in insurance group 50.

All BMW models come with a three-year warranty that's typical amongst the German brands, however it does also have unlimited mileage within this period.

BMW offers servicing packages that can be purchased when the car is new, covering maintenance for a fixed cost for a set period of time, for up to five years, which can also be transferred to subsequent owners.

Servicing packages can also be extended to include consumable items like brake pads, discs and a new clutch for an extra charge.