The BMW 7 Series has been designed to carry adults in ultimate luxury from the outset, and the latest version is 22mm longer than before. Choose the long-wheelbase version and it’s a further 14cm longer, providing even more room for rear passengers to stretch out and sleep on the move. 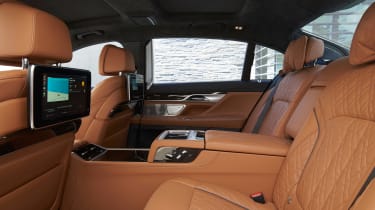 Travelling in the rear seats of the 7 Series is more like first-class air travel than squeezing into the back of a hatchback. That's especially the case if individual rear seats rather than the standard row of three are specified. Even more space can be afforded by pressing a button to move and tilt the front passenger seat out of the way. While in transit, you can enjoy a film, work or have a nap.

The powered boot lid opens to reveal a large 515-litre boot (10 litres more space than the Audi A8), providing plenty of room for suitcases or golf clubs. Those opulent rear seats don't fold down, though, so you can't expand the space.

While you're unlikely to ever see a 7 Series towing a trailer, its 2,300kg capability means it would actually be rather adept at the task.